Warm and relatively quiet conditions have been present across much of the West early this week. However, big changes are on the way as a cold storm system impacts the Northwest Wed-Thu, before deepening over the Central Rockies Friday with heavy snow for the CO Front Range foothills down to 6,000 ft. Meanwhile, wildfires continue to impact New Mexico with little relief in sight.

However, snowpack continues to decline rapidly across the Southern Rockies including Utah and Colorado, while the Tahoe area is below average as well despite some impressive spring snows.

Four large wildfires are burning across New Mexico, and recent weather conditions have not been helpful as there has been little to no rain, along with above-average warmth and frequent gusty winds. The Hermits Peak-Calf Canyon Fire is now the largest in New Mexico history at over 300,000 acres, and sadly, is threatening Sipapu Ski Resort and to a lesser extent Angel Fire.

The next two days will continue to feature elevated fire danger across the Four Corners states. The main threat on Wednesday involves isolated "dry" thunderstorms, which will not produce much rain but could produce enough lightning to potentially ignite new fires, as well as gusty downdraft winds.

As of early Wednesday afternoon, our Current Radar showed showers and thunderstorms developing across Colorado and far Northern New Mexico, including strong thunderstorms along the Palmer Divide between Denver and Colorado Springs. 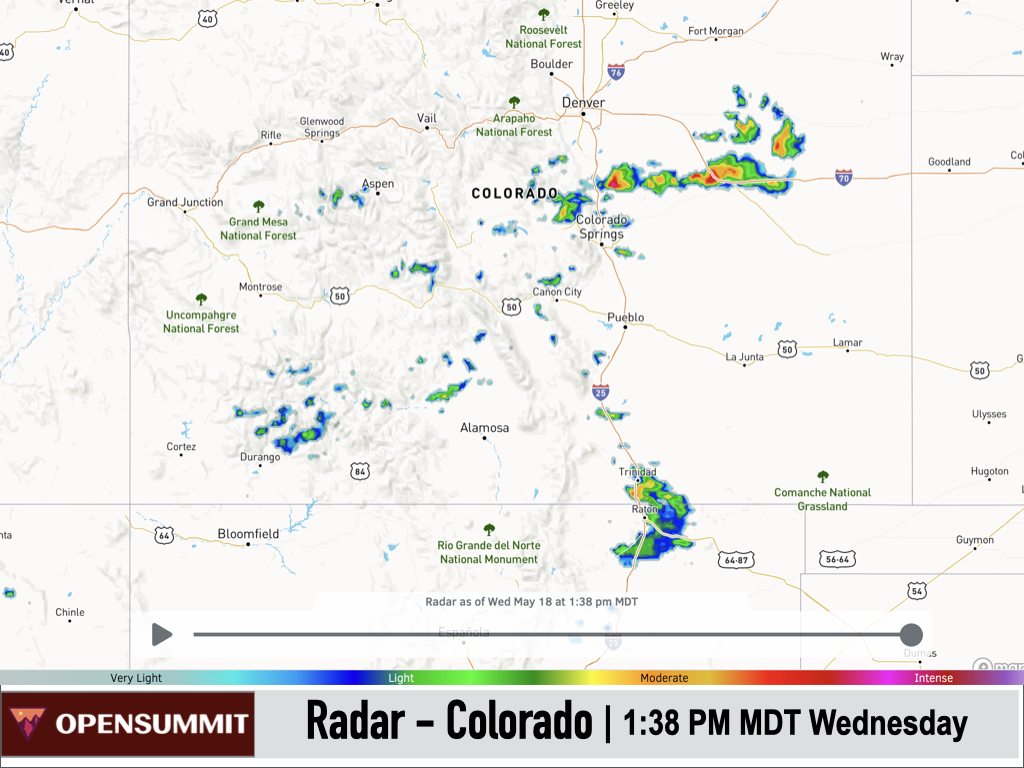 Check out our Lightning Density Map, which also showed the bulk of the activity along the Palmer Divide. 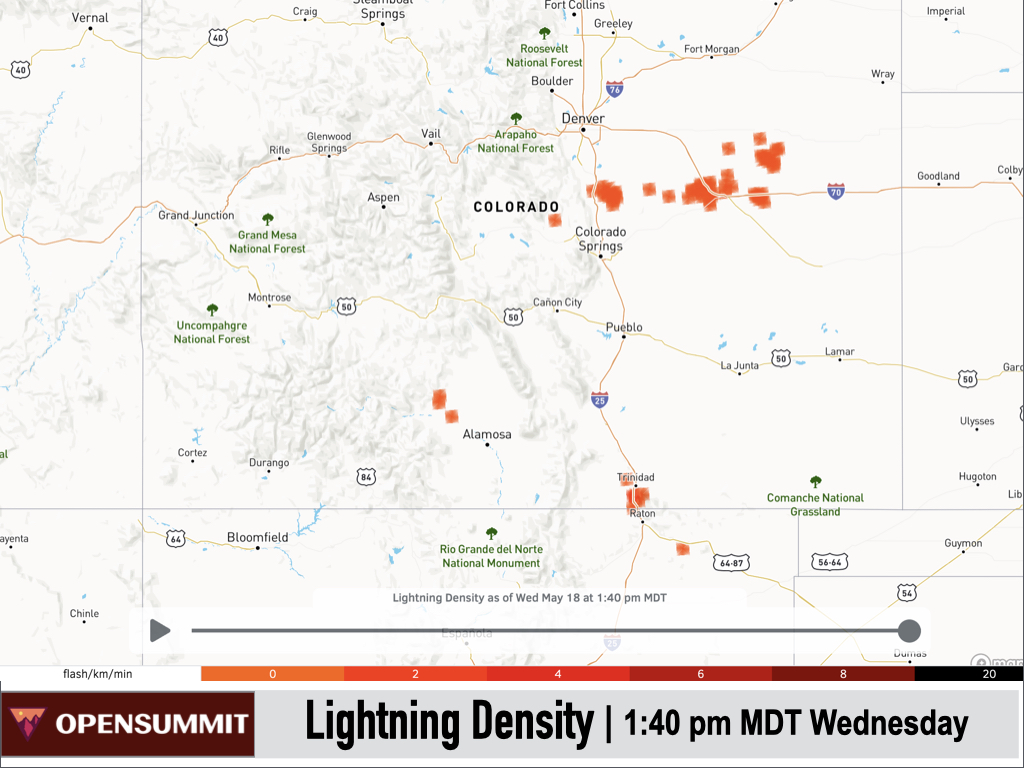 On Thursday, the threat for thunderstorms will decrease significantly across the Southern Rockies, but winds will increase as a storm system moves into the Western U.S., resulting in elevated to critical fire conditions across the Southwest as well as the Colorado Front Range. 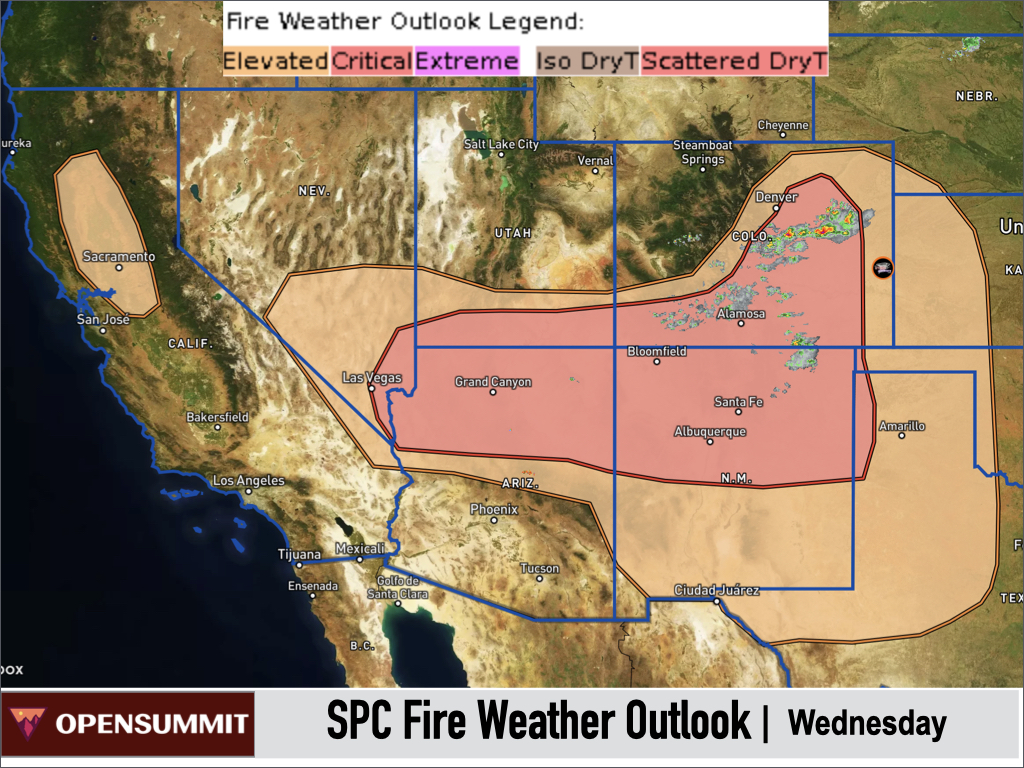 Showers, thunderstorms, and mountain snow for the Northwest on Wednesday-Thursday

A cold trough of low pressure is currently moving into the Pacific Northwest with showers developing across the Cascades. Rain and snow showers will pick up on Wednesday afternoon and evening throughout the Northwest and Northern Rockies and a few thunderstorms are likely to develop as well. 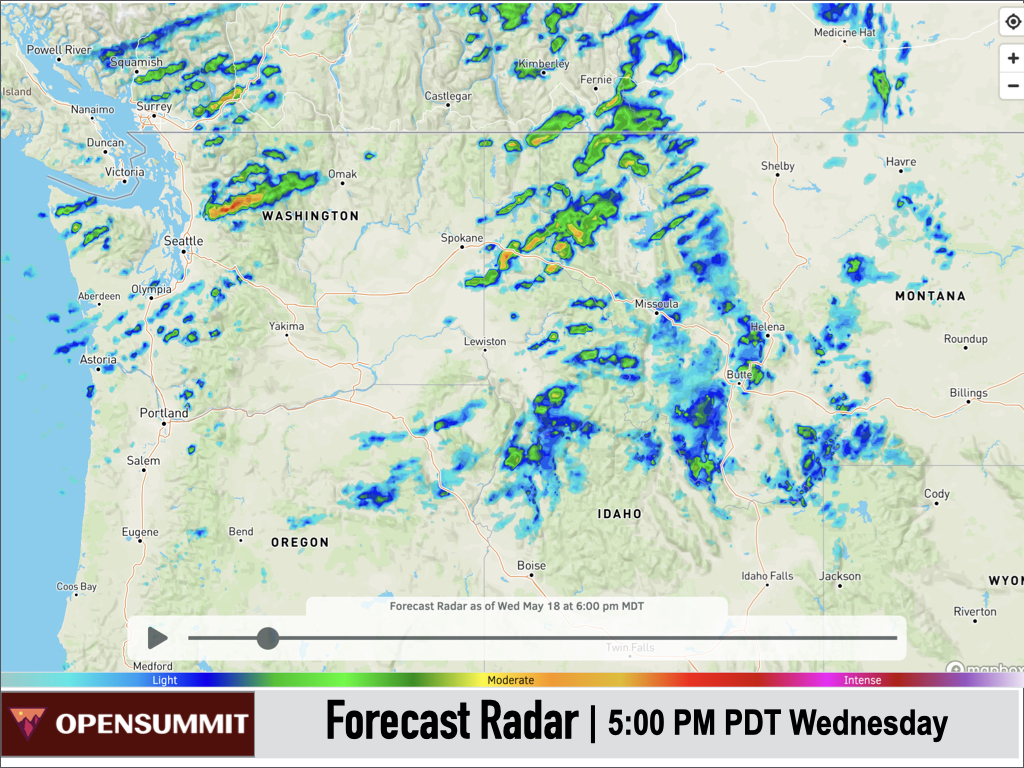 On Thursday, the focus of the heaviest precipitation will extend into the Rockies from BC/Alberta to Wyoming, including moderate to heavy mountain snow. 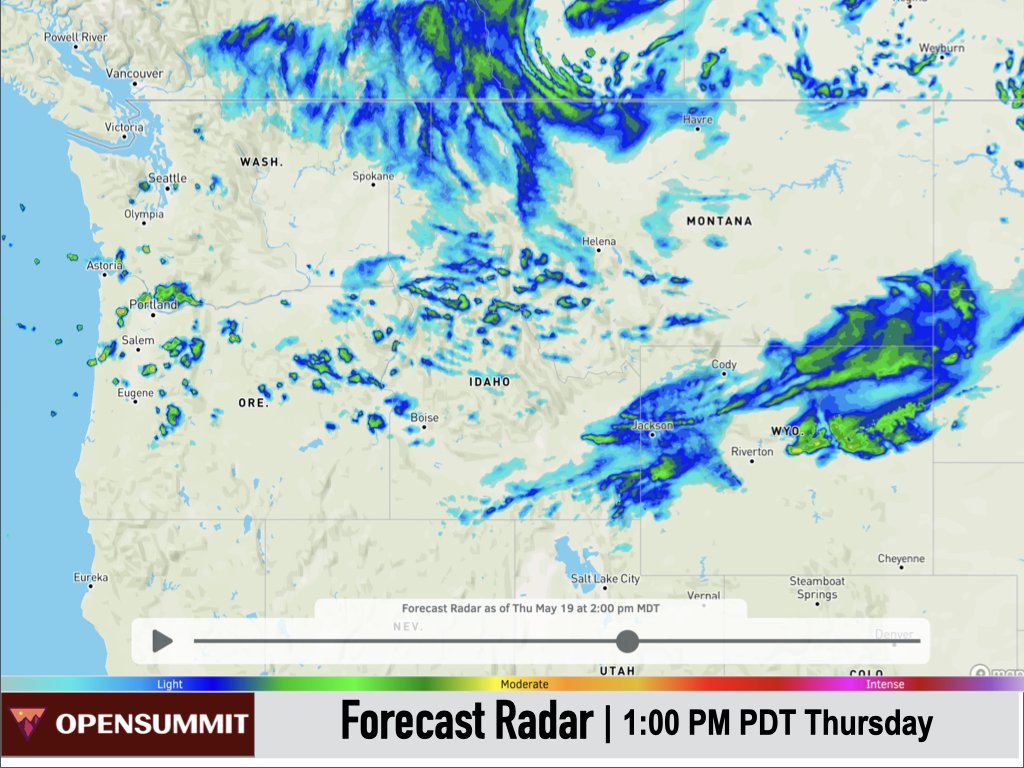 Here are the projected precipitation totals from Wednesday through the end of the day on Thursday. Parts of the Cascades, BC Interior, and Glacier National Park in Montana are expected to pick up over an inch of liquid-equivalent precipitation. 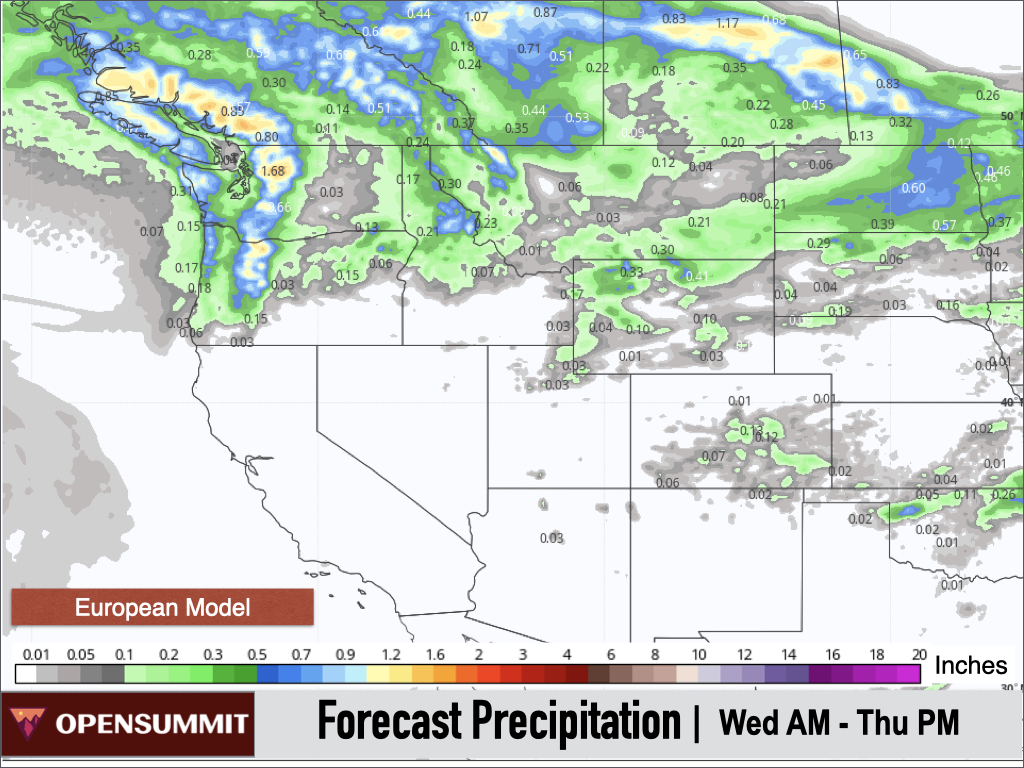 Unseasonably cold air is also arriving with this system and moderate to heavy snow will fall above 4,000 feet across the Northwest and Northern Rockies with the deepest totals expected in Washington and BC. 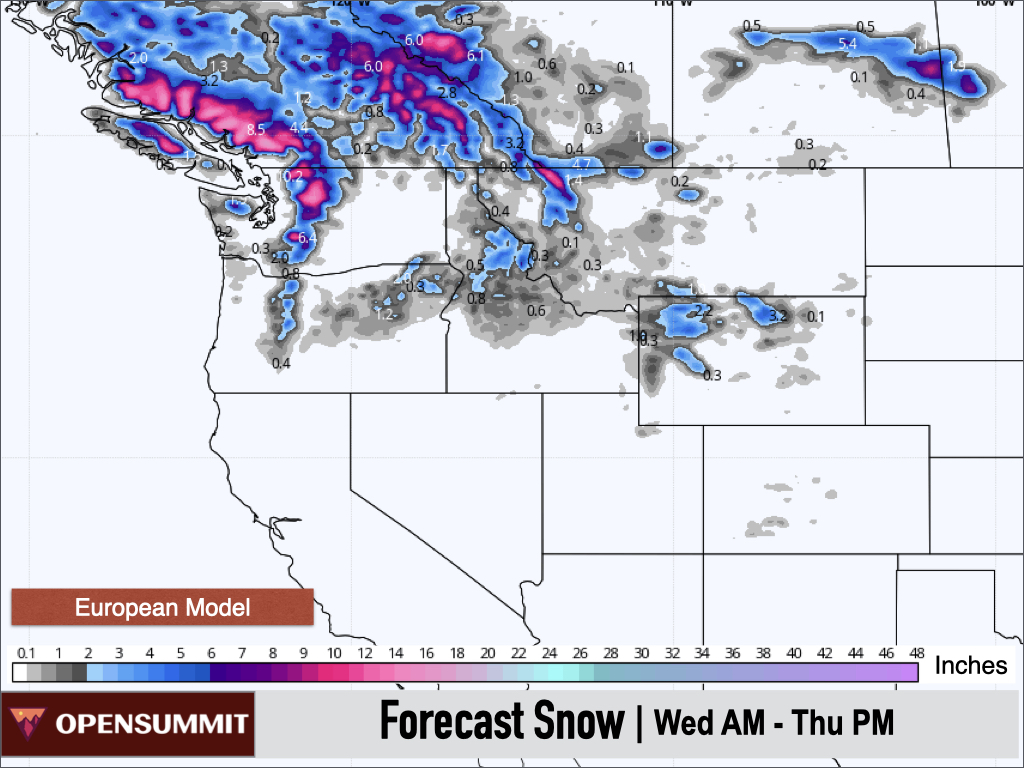 Temperatures on Thursday afternoon will be running 15-25 degrees below average throughout this region. 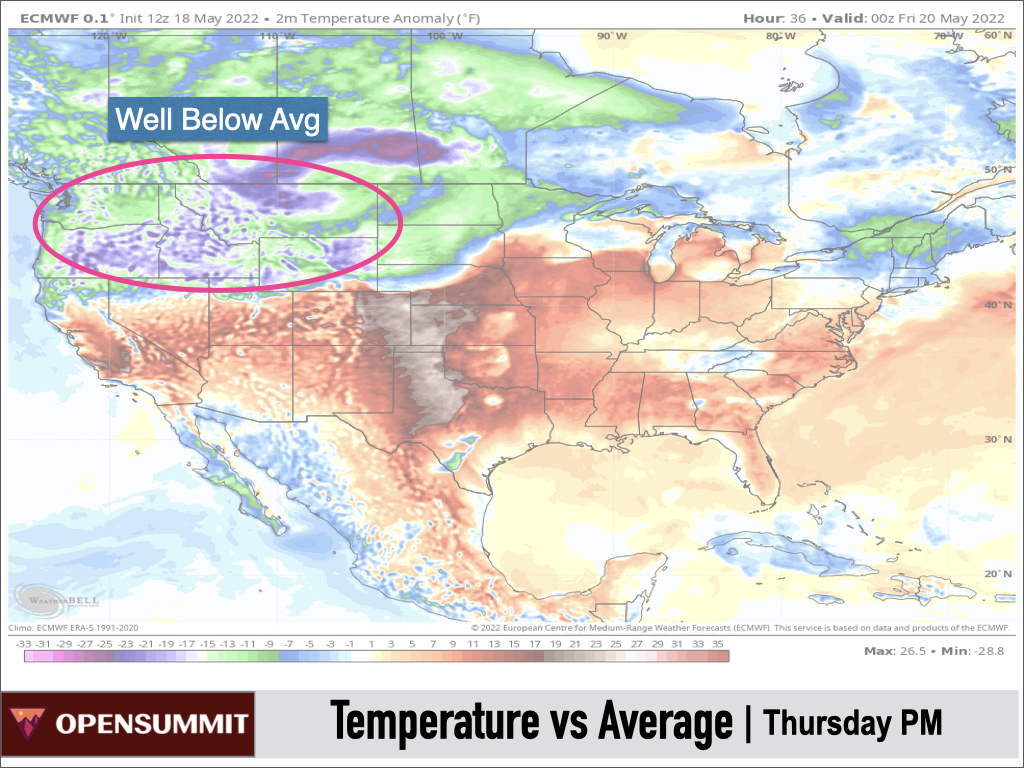 Heavy snow for the Colorado Front Range on Friday

On Friday, the storm system and associated cold front will dip southward into Colorado with snow developing across the Front Range and Northern/Central Mountains by early Friday morning. Snow levels will dip to near the Denver/Boulder metro area with heavy snow likely above 6,000 feet in the Front Range foothills. 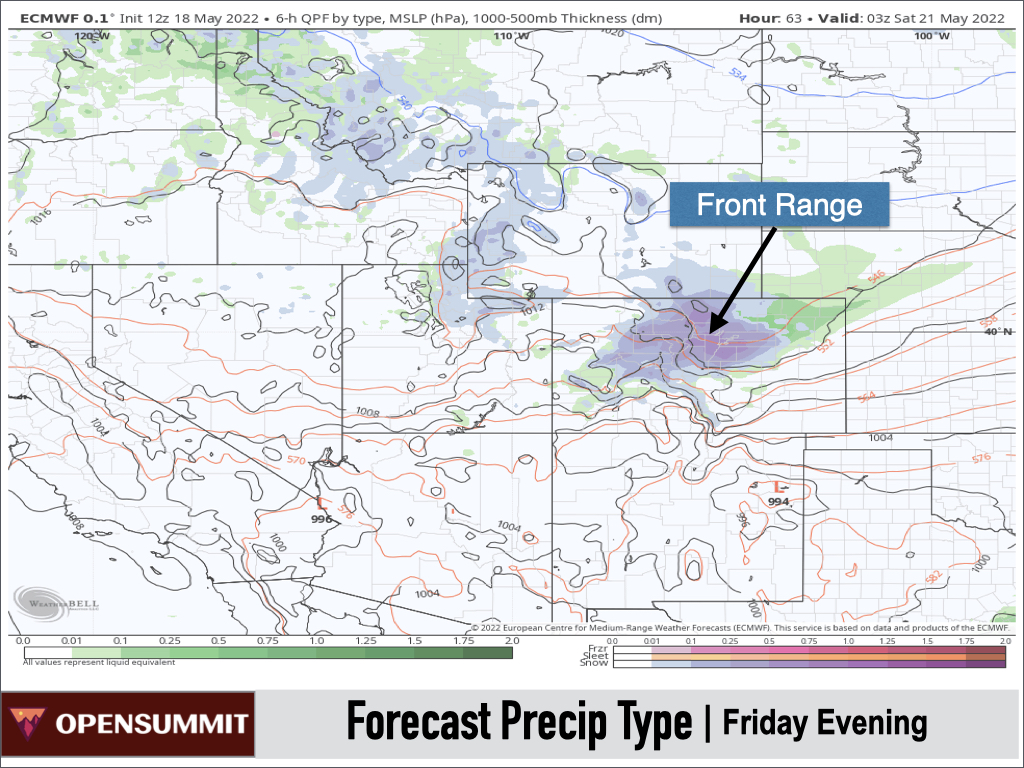 Significant precipitation is likely along the eastern slopes of the Front Range in particular with lighter amounts west of the Continental Divide. Additional rain/snow showers are likely on Friday across the Northern Rockies and Pacific Northwest as well.

For more details on this storm, check out the Colorado Daily Snow which was updated on Wednesday morning. 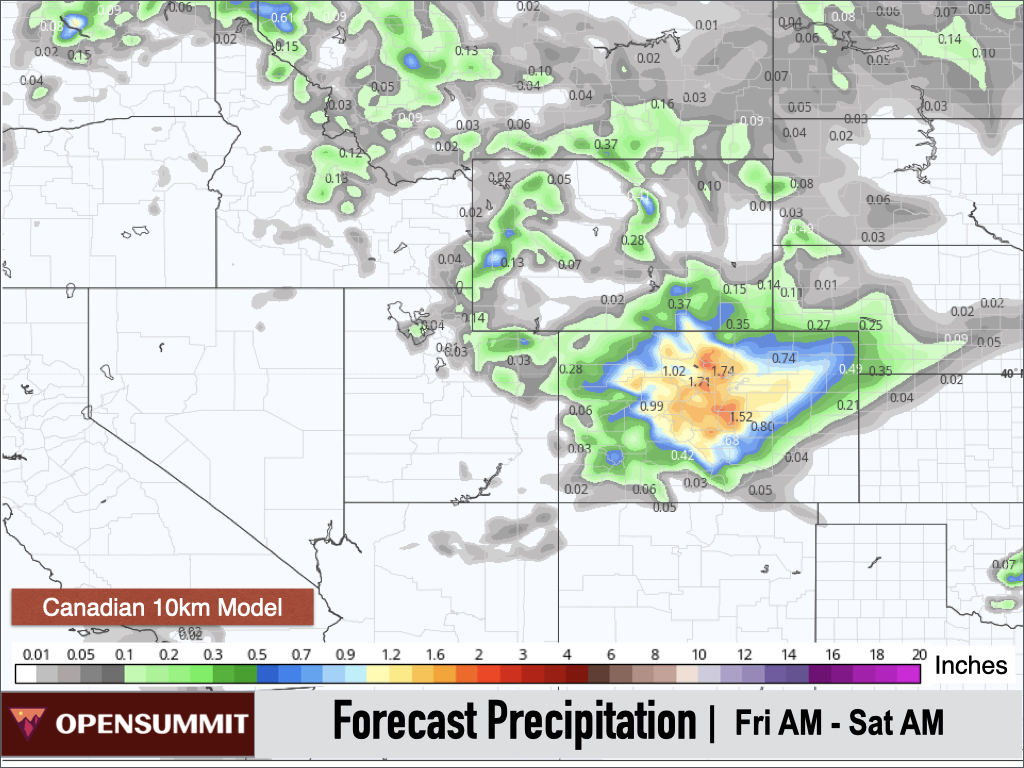 Temperatures along the Front Range will be 30+ degrees below average on Friday afternoon, while most areas across the remainder of the West will be colder than average as well. 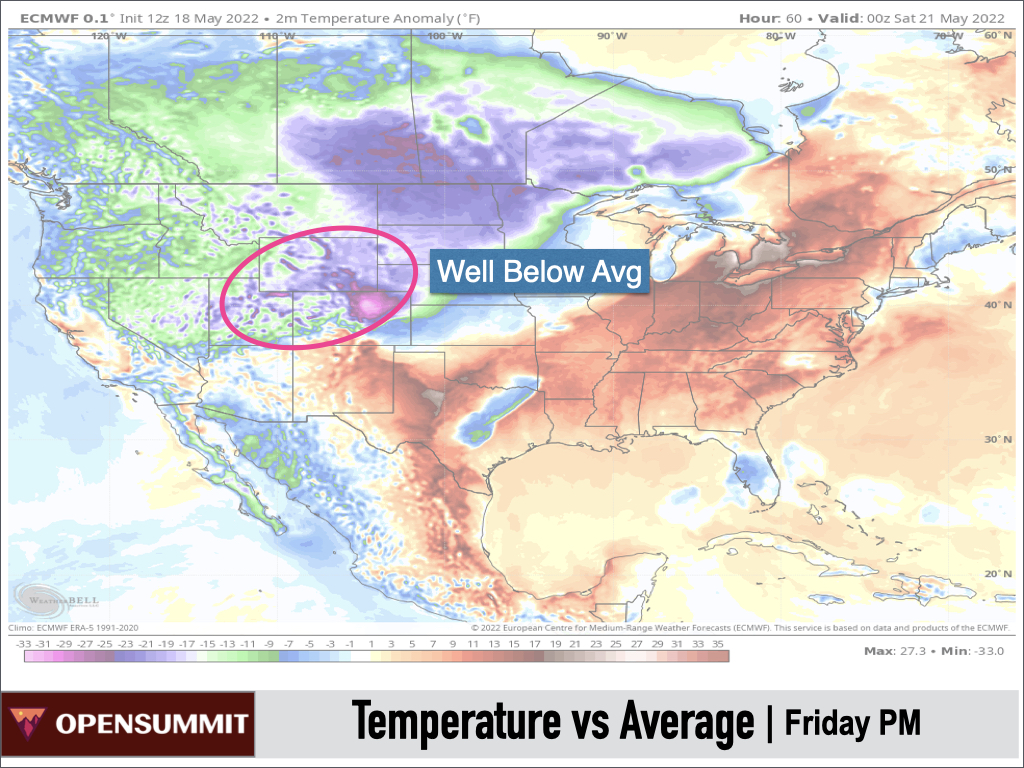 Unseasonably cool with rain/snow showers across the Rockies Saturday-Sunday

The heaviest snowfall is expected to end across Colorado by Saturday morning, but a secondary disturbance will move across the Northwest and Central/Northern Rockies over the weekend with additional rounds of snow and rain showers likely.

Temperatures will remain well below average and snow levels will be lower than is typical for late May as a result. 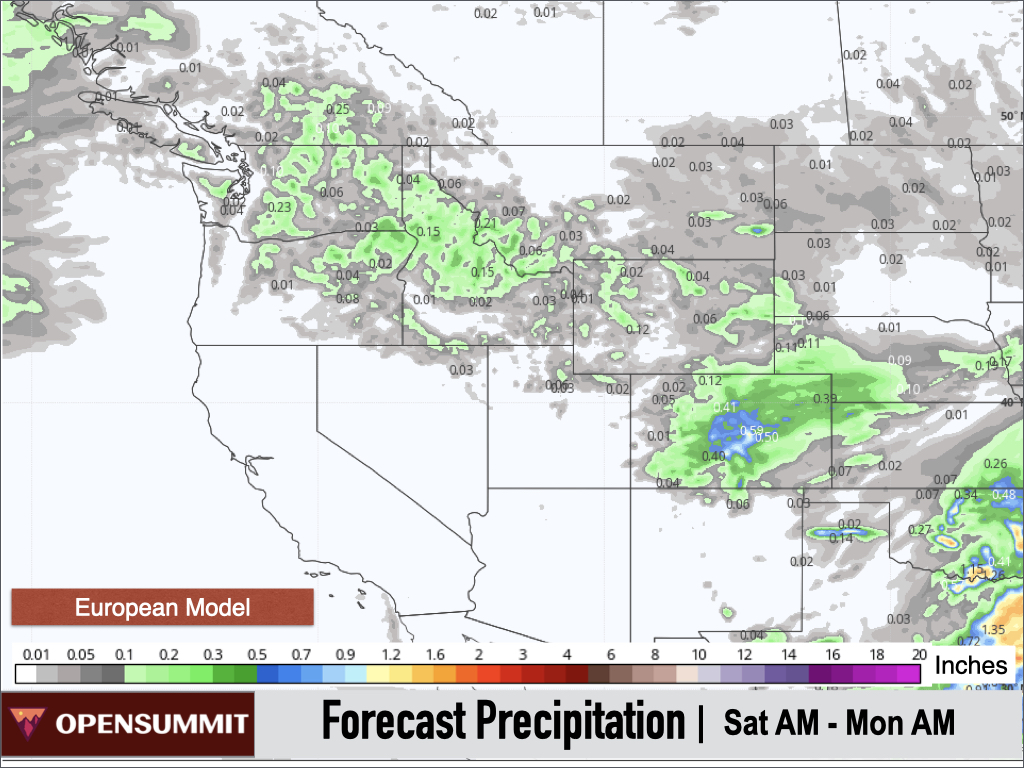 Temperatures will begin to warm back up to more seasonal levels across the West during this period, and California will see temperatures running above average.

However, yet another disturbance is expected to drop in from the northwest and impact the Cascades and Rockies with rain/snow showers and perhaps some thunderstorms. 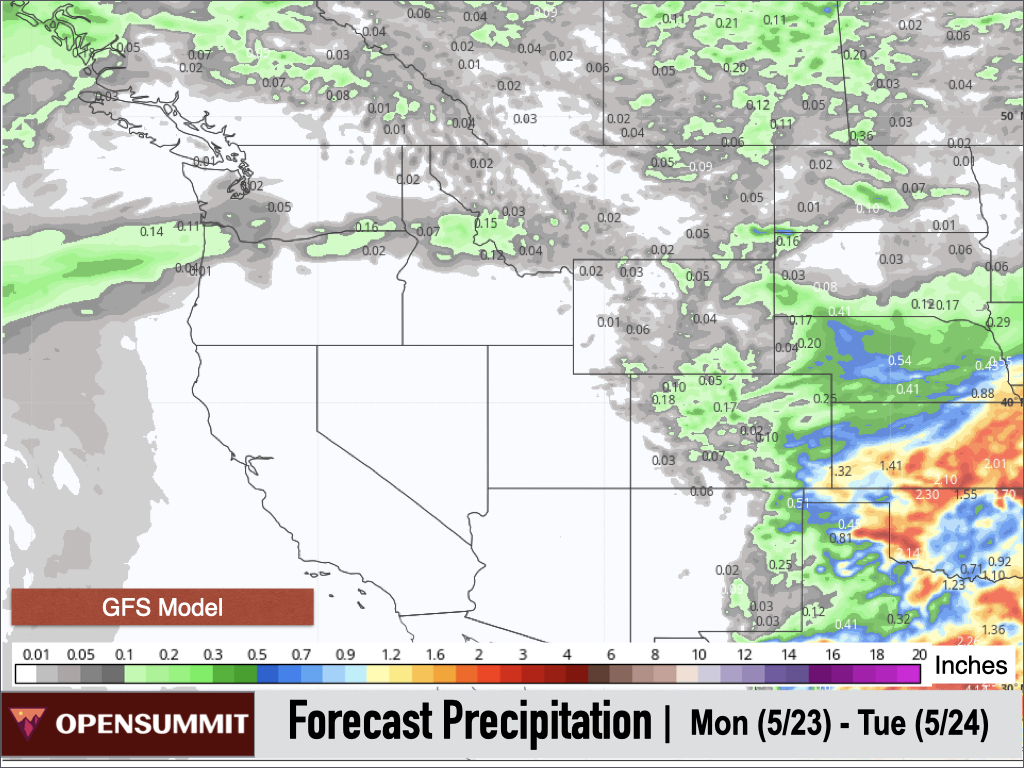 Heading into the Memorial Weekend holiday period, we should see a trend toward above-average warmth across the Southwest as well as the Central and Southern Rockies with limited rain chances, while the Northwest is projected to stay in a cooler pattern with near to below-average temperatures along with wetter conditions. 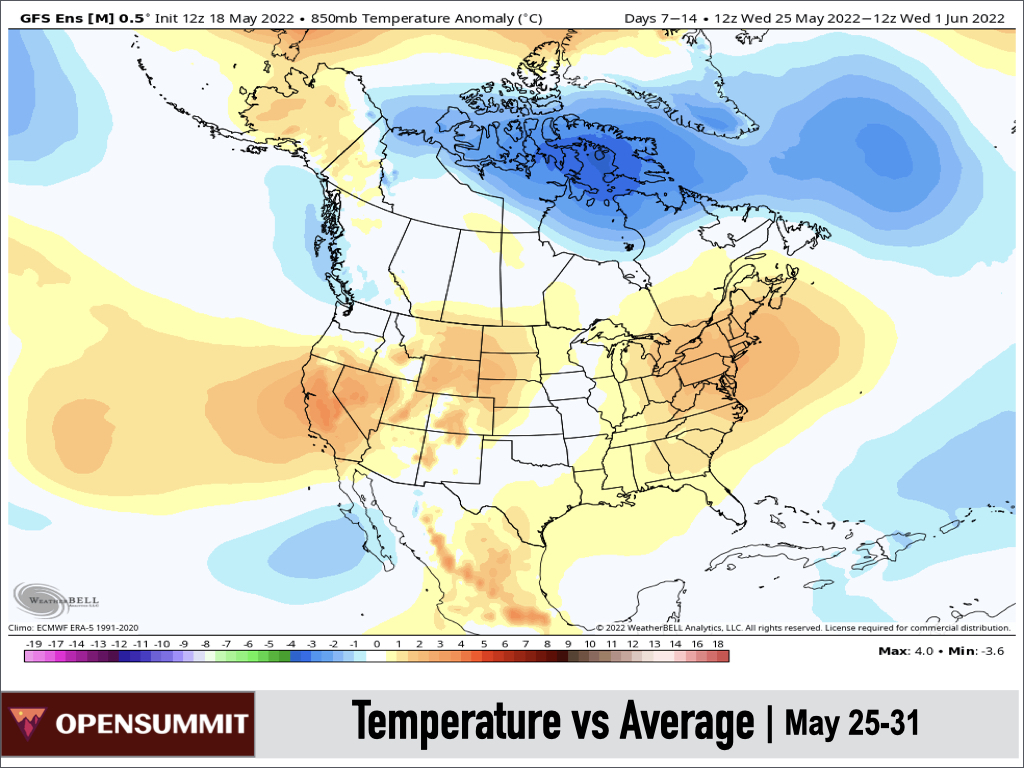 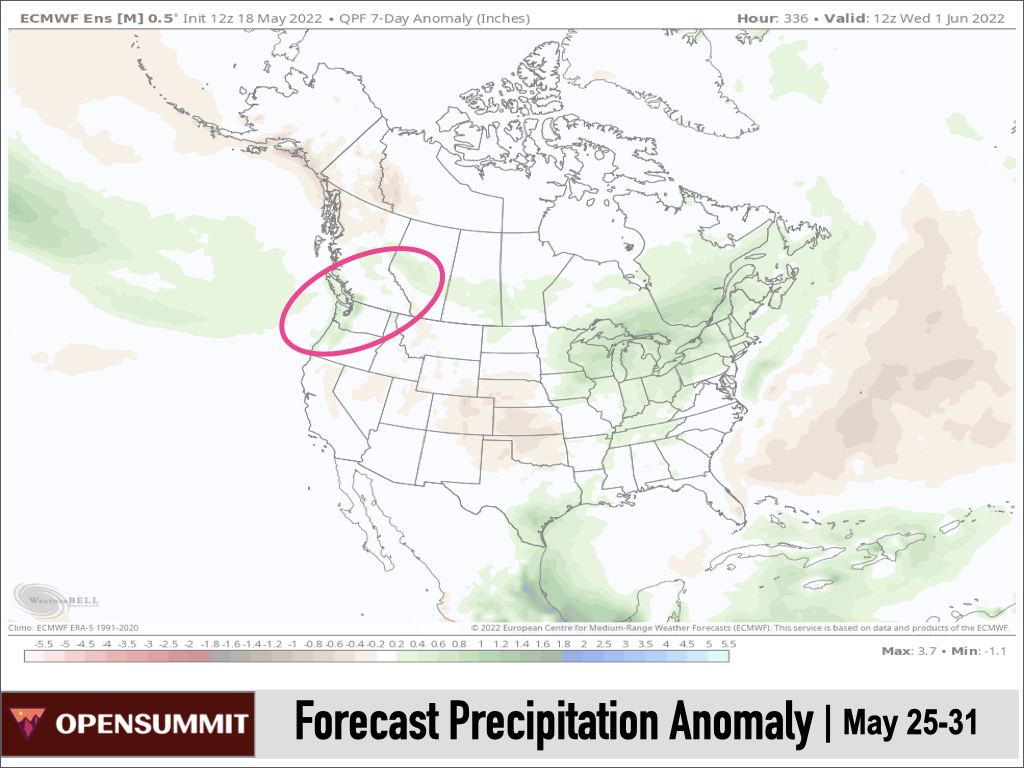 Thanks so much for reading! Next update on Wednesday (5/25).