Thunderstorm coverage will favor Arizona and Utah on Wednesday and Thursday with a high potential for flash flooding in slot canyons and dry washes. Thunderstorm coverage and intensity will also increase across Colorado & New Mexico late this week and into the holiday weekend. A trough setting up near the West Coast will also result in a wet holiday weekend across the PNW.

A trough moving across the Northwest and Northern Rockies will result in isolated and generally light showers and thunderstorms on Wednesday. Meanwhile, an active monsoon remains in place over the Four Corners with a moisture surge currently impacting Arizona and Southern Utah, while moisture will also increase across Colorado and New Mexico in the days to follow. 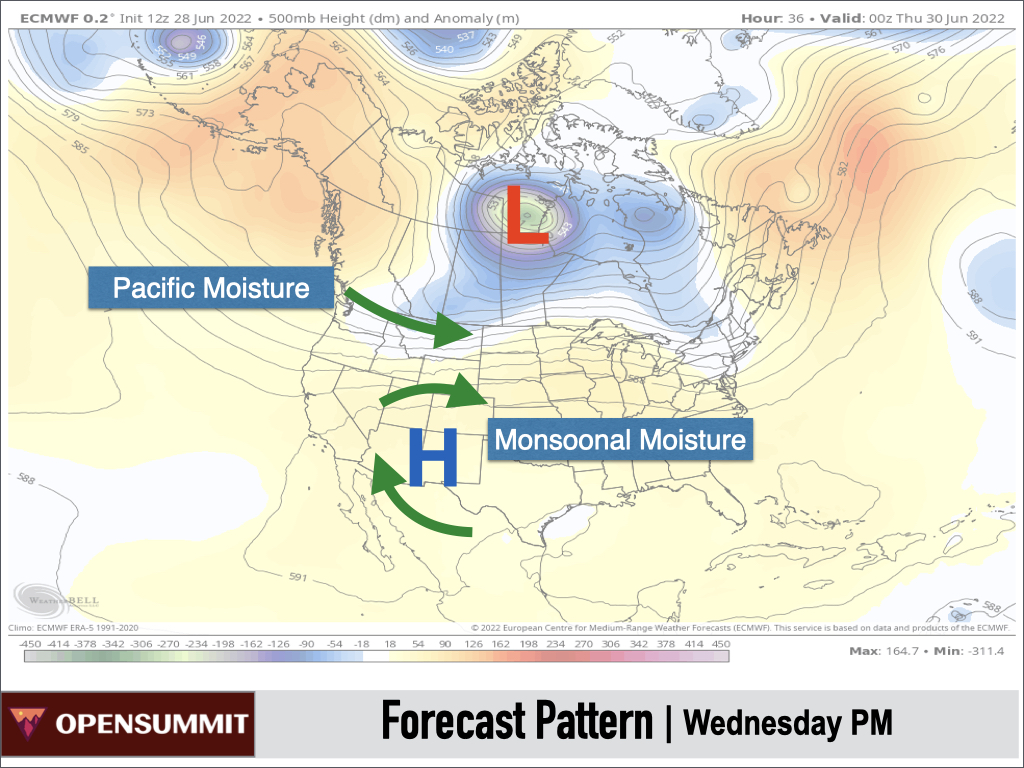 The Fourth of July holiday weekend is also looking quite active across a large portion of the West. More on that in the Extended Forecast...

The main focus of monsoonal moisture will be across Arizona and Utah via a southerly flow, and widespread thunderstorms can be expected with the potential for locally heavy rains and flash flooding. Thunderstorm coverage will be fairly extensive across Colorado as well, with more isolated coverage in New Mexico.

Pacific moisture associated with a trough moving across the Northwest and Northern Rockies will result in showers across the Olympics and Cascades in Washington as well as the Glacier National Park region. Isolated thunderstorms will also be possible across Western/Central Montana as well as Wyoming. 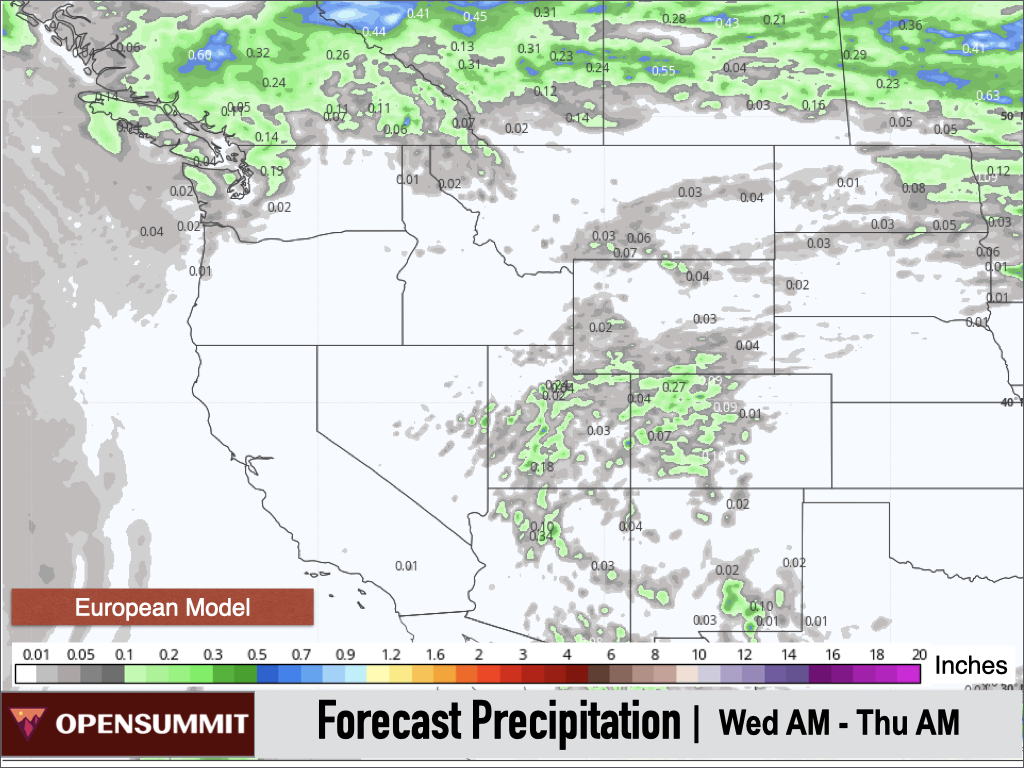 Popular recreation areas throughout Arizona and Southern Utah including Zion, Escalante, Capitol Reef, Grand Canyon, and Sedona will see an elevated risk for flash flooding in slot canyons and dry washes on Wednesday. The map below is a good overview for areas where excessive rainfall could occur, but it also tends to under-represent the slot canyon flooding threat in Southern Utah. 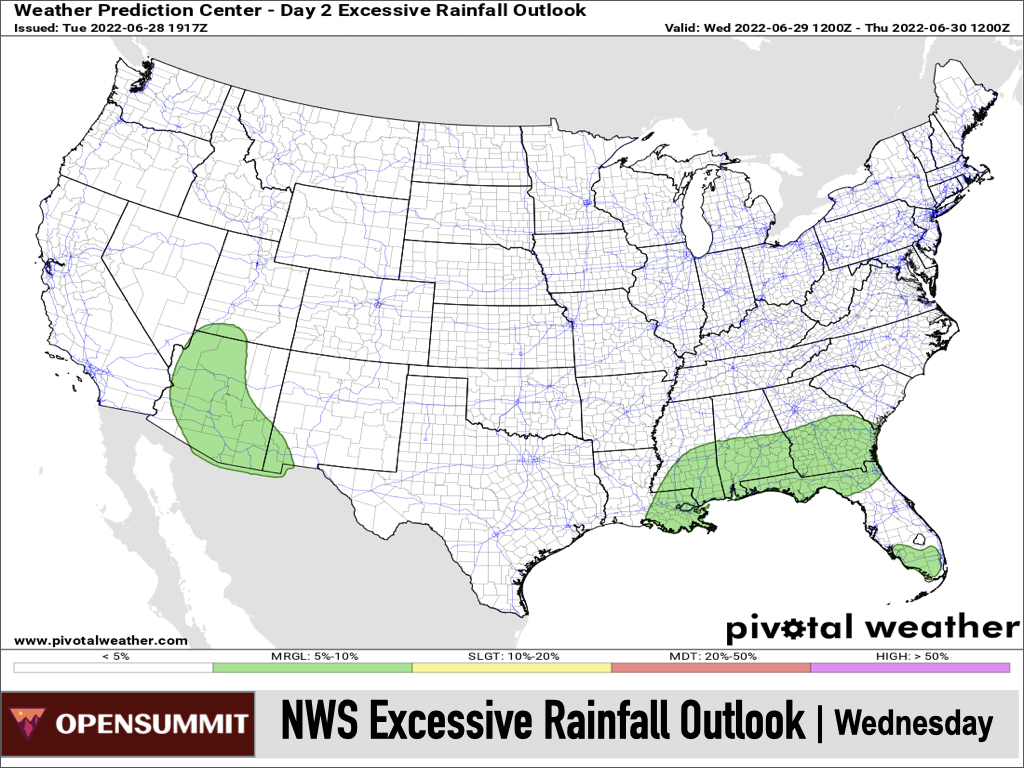 This is shaping up to be an active day across a large portion of the Southern Rockies as abundant monsoonal moisture remains in place across Arizona and Utah, while also increasing across Colorado and Southern Wyoming. A backdoor cold front slipping into Eastern Colorado will also increase the threat for thunderstorms along the east side of the Continental Divide.

The one exception will be New Mexico, where thunderstorm coverage will be more isolated and generally confined to northern and western parts of the state. Further north, a dry pattern is expected across the Northwest and Northern Rockies. 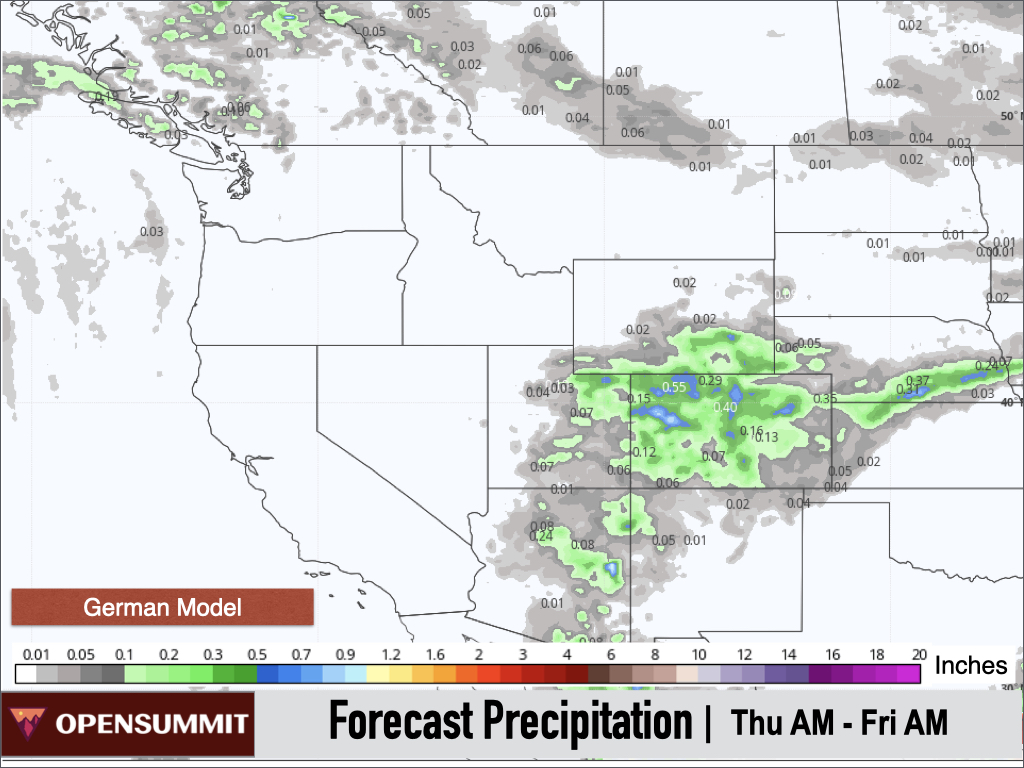 The flash flooding threat will remain high for slot canyons and dry washes in Arizona and Utah, and the threat for flash flooding and excessive runoff will also expand into the mountains of Eastern Utah along with a large portion of Colorado. 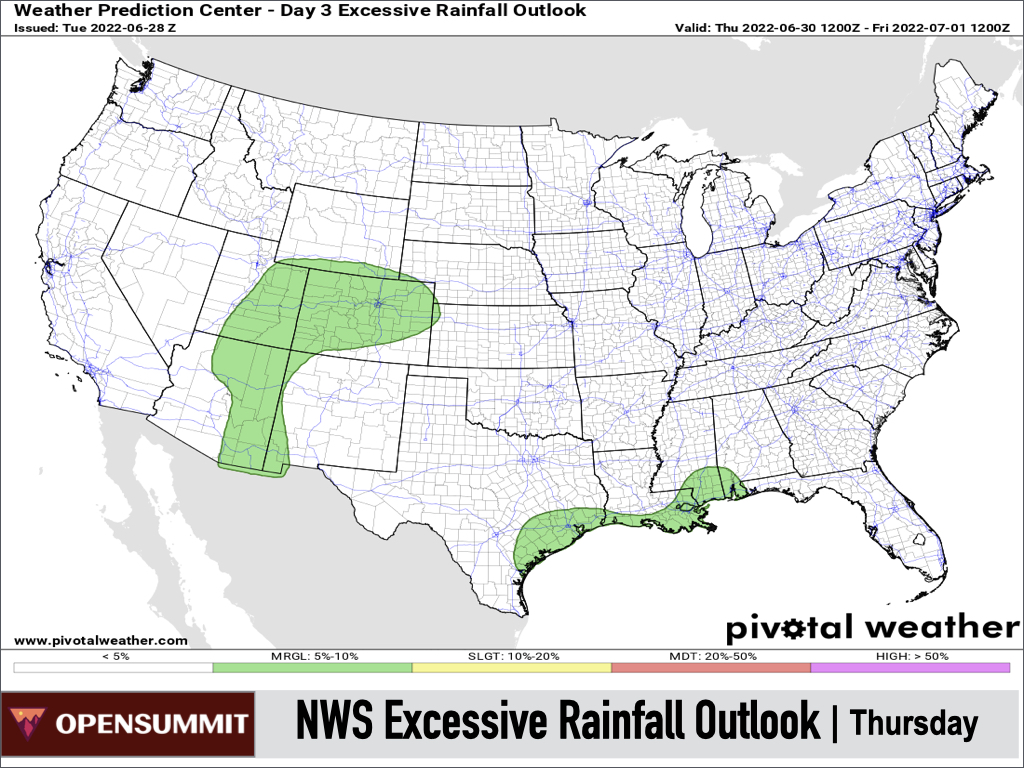 The overall trend on Friday will be an eastward and northward shift in monsoonal moisture and associated thunderstorm activity. Thunderstorm coverage will be most widespread across CentralSouthern Colorado as well as New Mexico, while storm coverage and the associated flash flooding risk will decrease across Southwest Utah and Northern Arizona.

A little bit of monsoonal moisture will also sneak into Wyoming and Southern Montana, resulting in isolated thunderstorms on Friday afternoon. 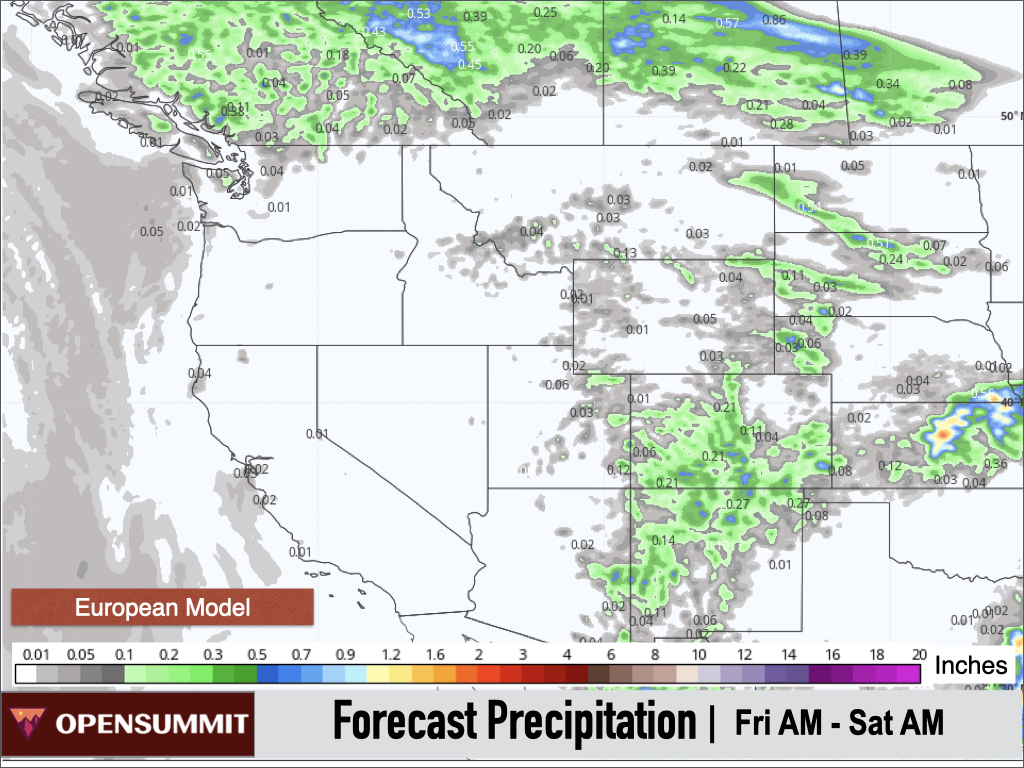 The Fourth of July holiday weekend is shaping up to be an active one across most of the West. A trough of low pressure will set up along the West Coast and will transport Pacific moisture into the Pacific Northwest and far Northern Rockies.

At the same time, increasing southerly flow ahead of the trough will continue to transport abundant monsoonal moisture into New Mexico and Colorado, with moisture also surging northward into Wyoming and Southern Montana. 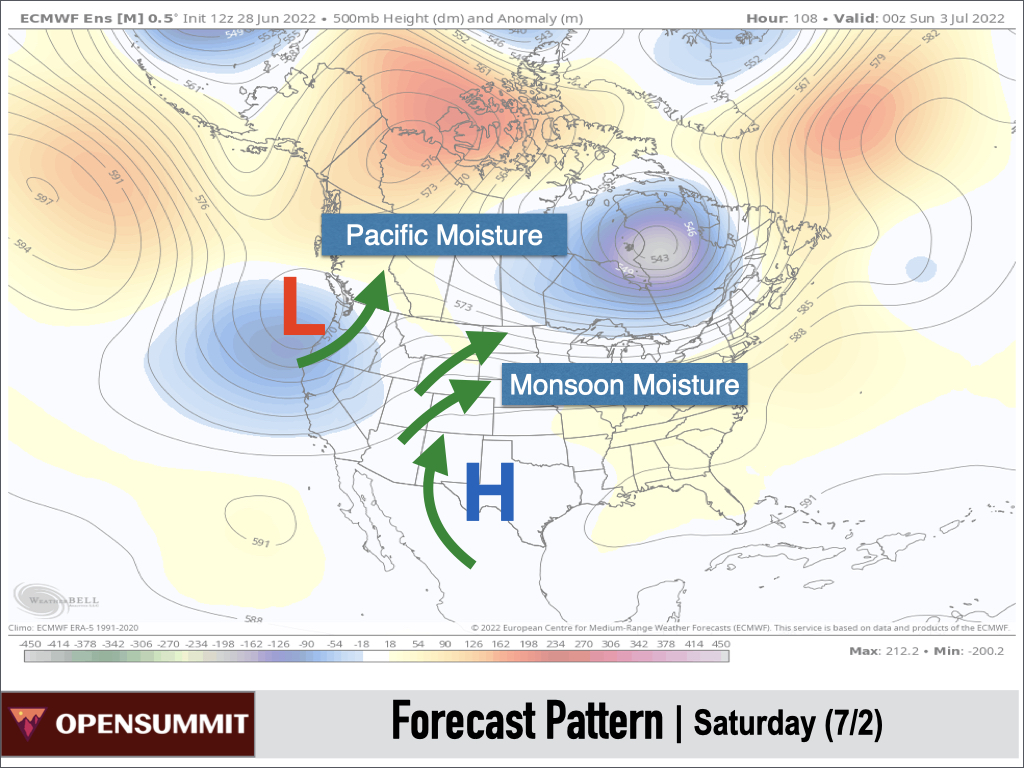 There are still some model discrepancies on exactly where the trough will set up near the West Coast, which will affect moisture transport this weekend. At this time, New Mexico and Colorado are in line to see the highest impacts associated with the monsoon, with numerous thunderstorms and heavy rain expected.

Utah and Arizona could end up on the drier side, but confidence is low as some models are projecting the moisture plume to shift further west, which would lead to a greater threat of thunderstorms and heavy rain.

Further north, showers are expected to become extensive across the Cascades this weekend with soaking rains expected, and thunderstorms will be possible as well. Wetting rains could even extend southward into Northern California.

Northern Idaho and Northern Montana could also see showers/thunderstorms with the potential for heavy rain at some point over the weekend, though confidence is low in terms of timing and coverage. 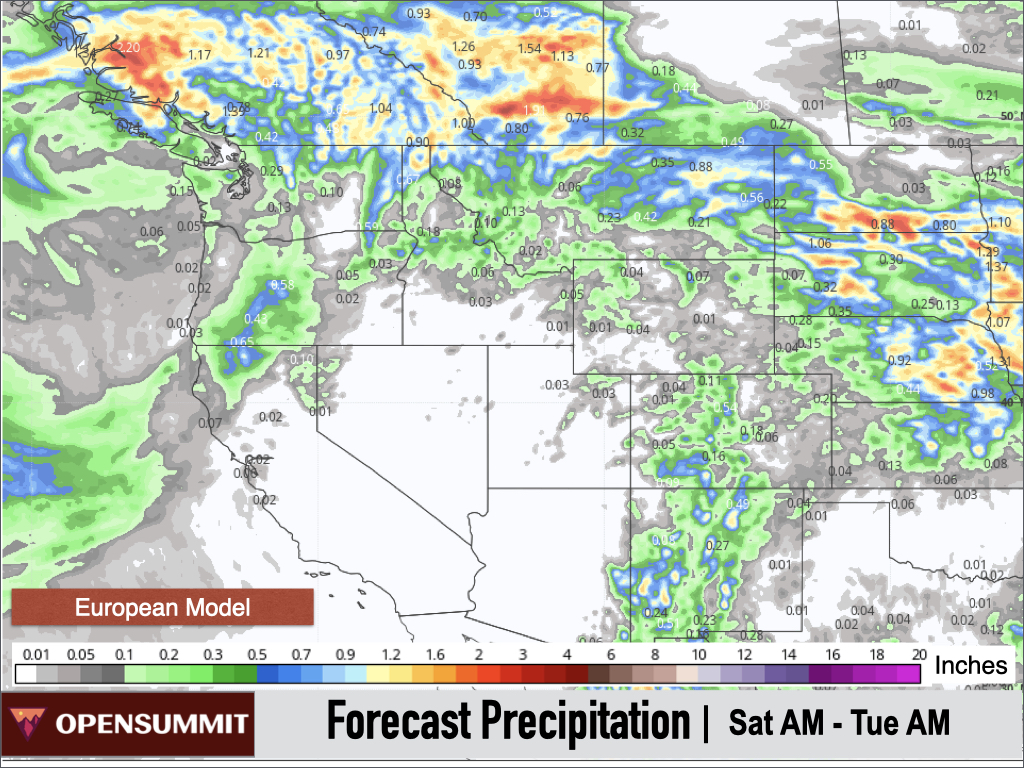 The trough of low pressure that will impact the West over the Fourth of July will begin to weaken and lift northward into Canada in the days to follow. A ridge of high pressure will take hold across the Western U.S. in its wake, resulting in a warming trend throughout the West with above-average warmth expected for many areas. 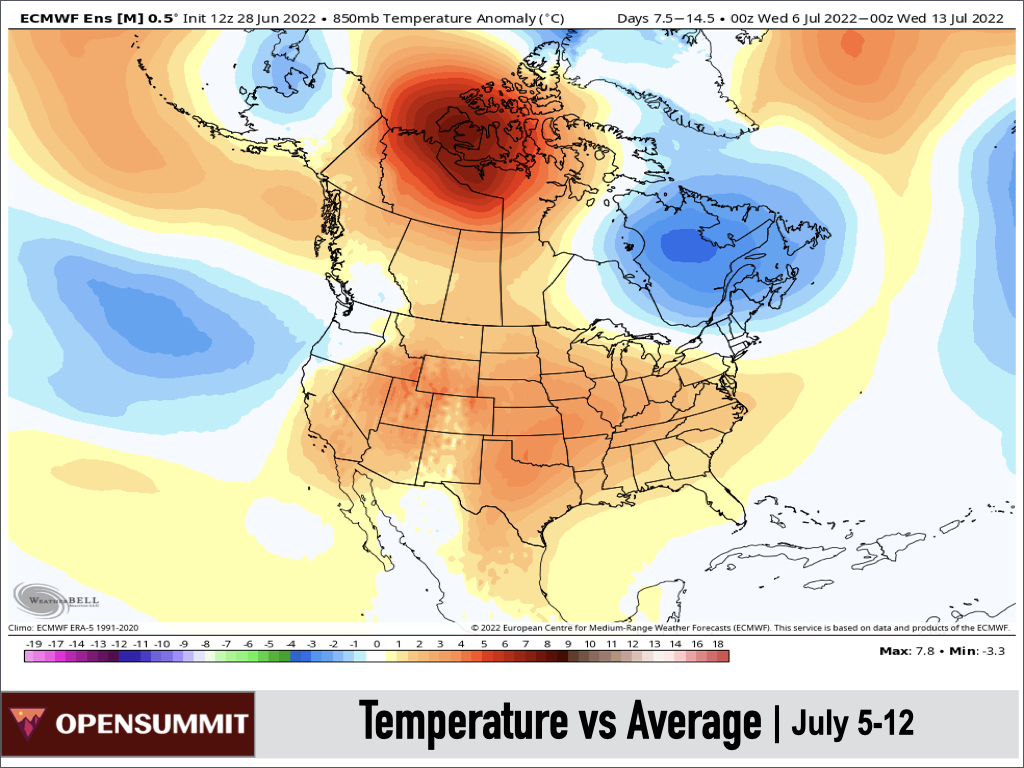 The monsoon may also start to relax a bit, at least compared to before. Rainfall across the Four Corners region is projected to be around average during this period with near-daily thunderstorms still a good bet for mountainous areas, but probably less widespread in coverage.

A drier pattern is likely to prevail across the Northwest, Northern Rockies, and California during this period. 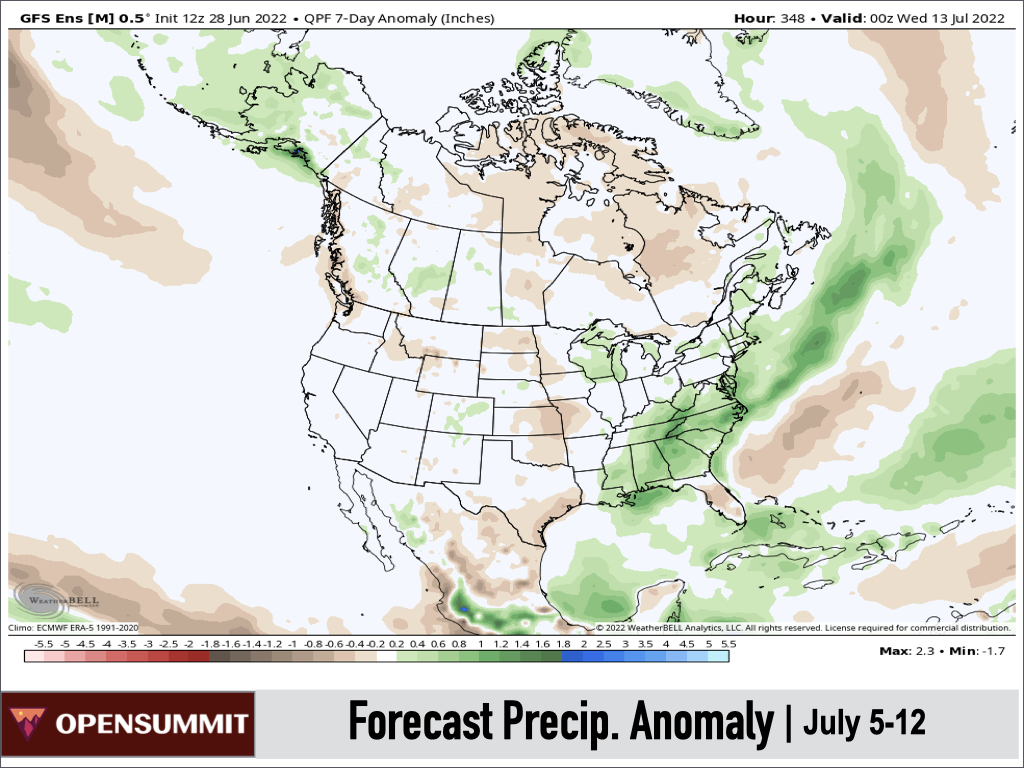 Thanks so much for reading! Next update on Friday (7/1).