Following record-breaking heat for much of the Western US, we have some relief from the heat in-store through early next week, along with increased chances for thunderstorm activity along the divide through the upcoming weekend and into early next week. Smoke will continue to linger across much of the Southwest. Wildfire risk will also remain very high.

To say that it's been hot for many locations in the Western United States this week would be an understatement. Yes, it is June and we're approaching the summer solstice this weekend but the hottest temperatures of the summer typically do not occur until July.

Just look at the following graphic from the National Weather Service in Salt Lake City. They tied the highest temperature EVER recorded at Salt Lake City in any month of the year, in the last 147 years of records, on Wednesday, June 15. It has only happened twice before: July 2002 and July 1960. 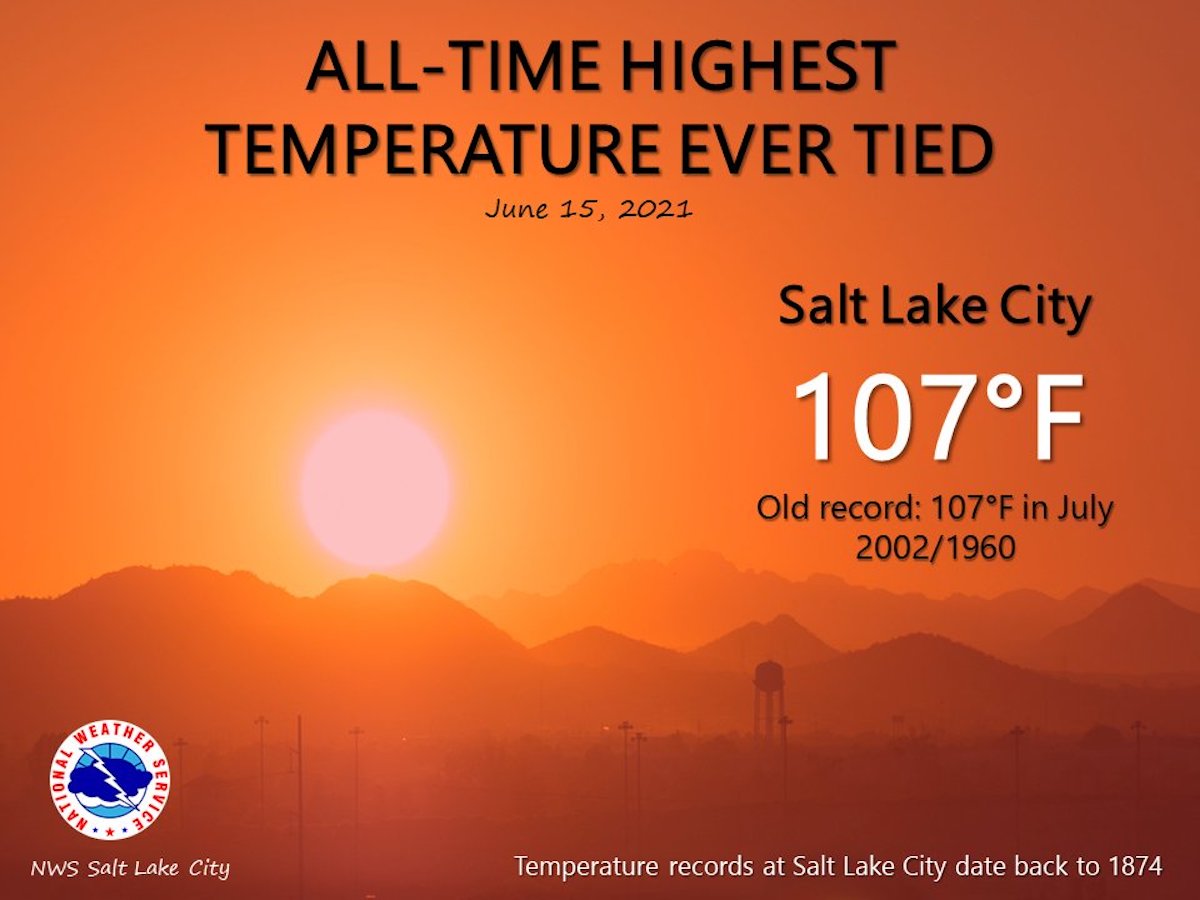 Moving onto the forecast, much of the West will continue to receive well-above-average temperatures, especially in California. Relief from the heat will prevail, albeit slightly, to areas within the Intermountain West. Isolated thunderstorms will also pop up across Colorado ahead of an increased chance for storm activity along and east of the divide through early next week. 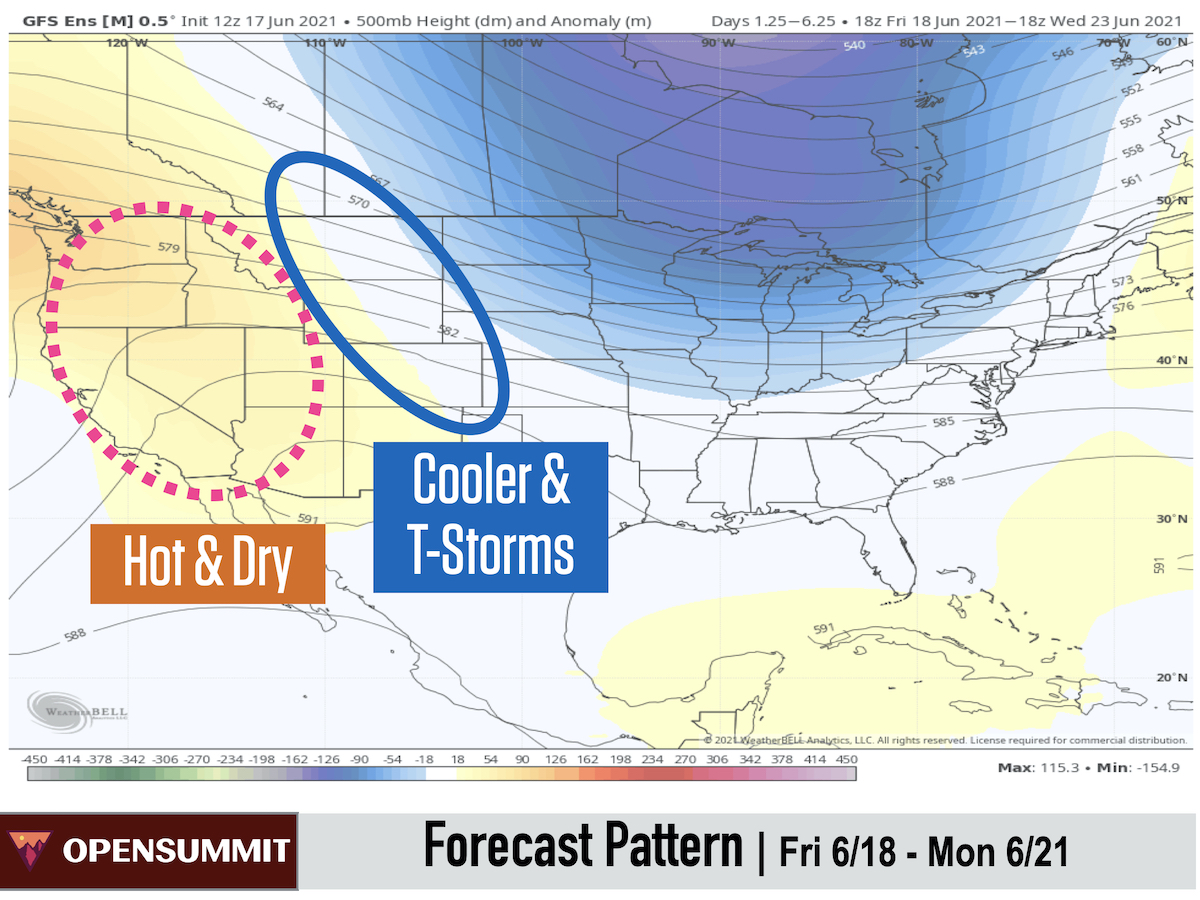 And as we've been mentioning so far this June, smoke will continue to circulate across much of the Southwest as wildfires in Arizona continue to billow. Gusty winds from thunderstorm activity, along with very dry vegetation, will keep the fire risk very high so please keep an eye on local fire restrictions and spread the word to folks that might not be informed.

Make sure to always check out the following high-resolution maps for the latest conditions regarding wildfire smoke ahead of your next outdoor activity:

Unlimited access to the maps listed above are just a few of the many benefits of our All-Access subscription.

There's not a lot of big changes to discuss for Friday outside of cooler temperatures for areas on the east side of the divide in Montana. California will remain in the bullseye with well above-average temperatures. 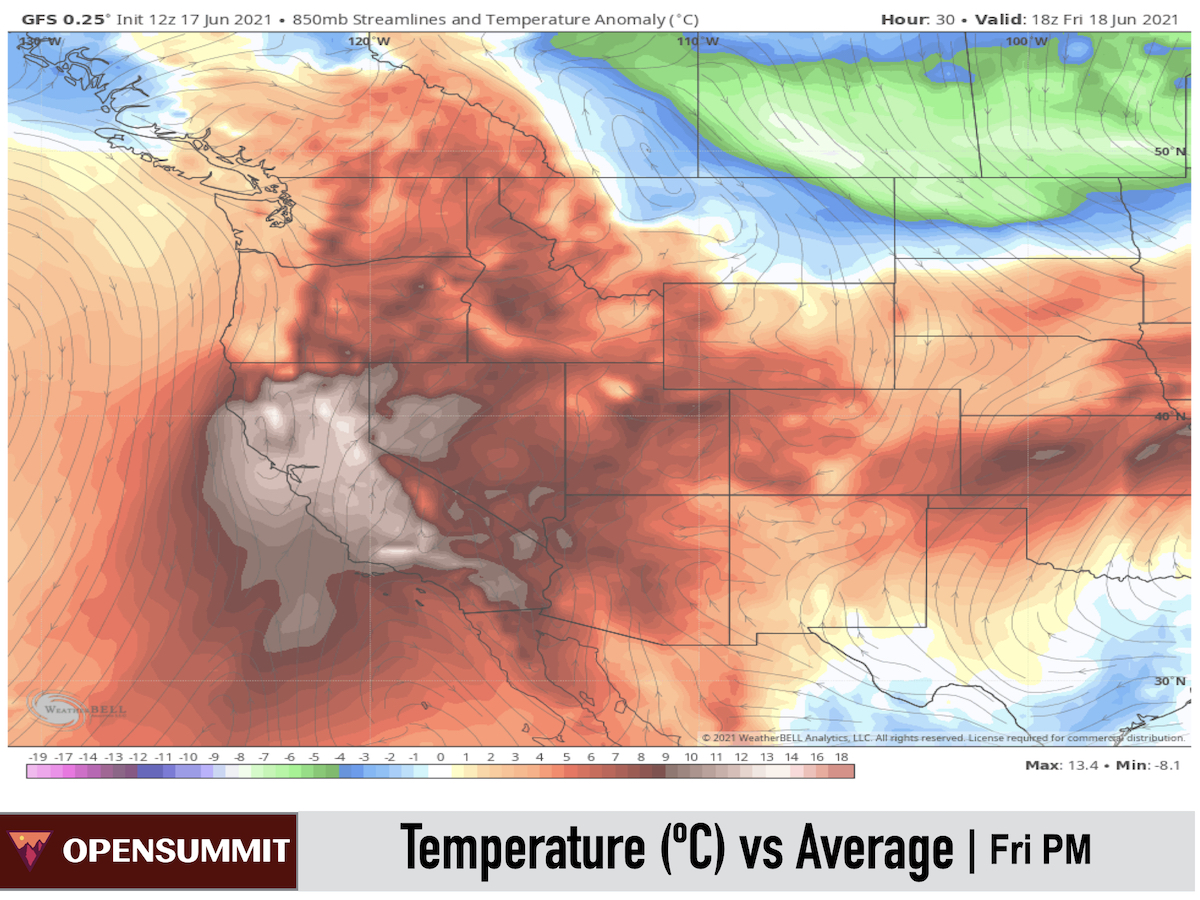 Isolated thunderstorm activity will increase as an uptick in moisture streams in the Southwest. The best coverage will likely prevail in Southern Colorado, though any precipitation will not amount too much. Outflow winds from the thunderstorms will also bring an increased fire risk. 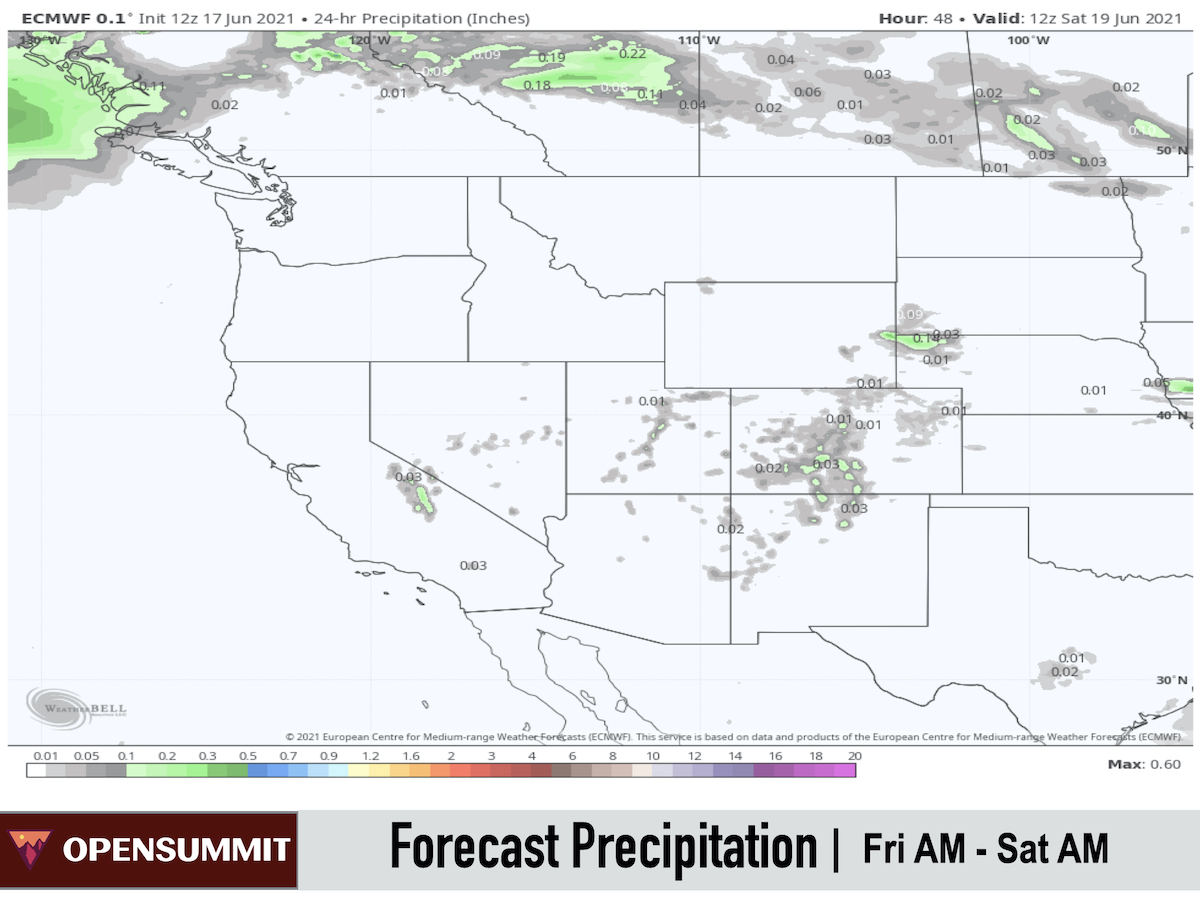 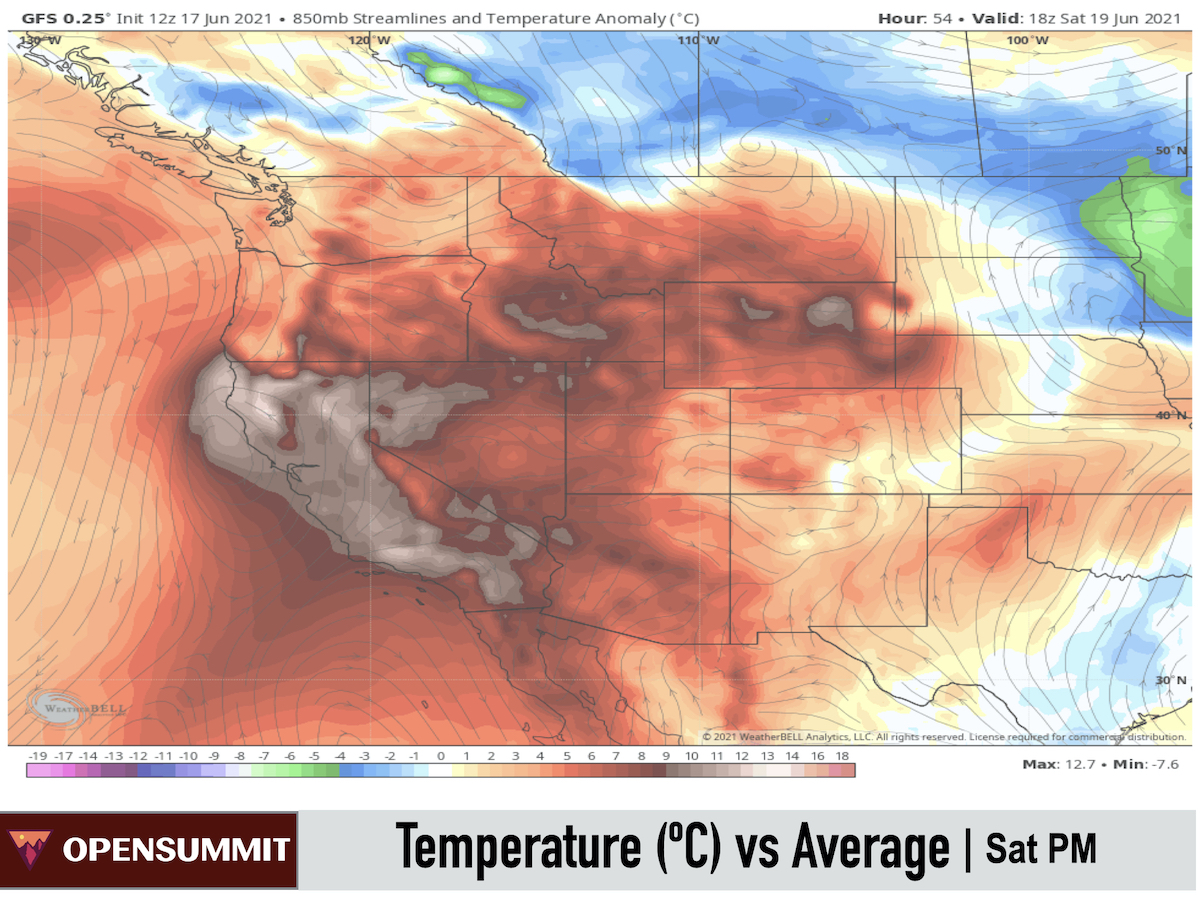 For precipitation, Colorado will once again see a slight uptick in isolated thunderstorms, mainly across the higher elevations. Start early and aim to be below treeline by 12-noon on Saturday if you're heading into the high alpine. Much like Friday, I'm really only seeing very light precipitation, if any, reaching the ground. 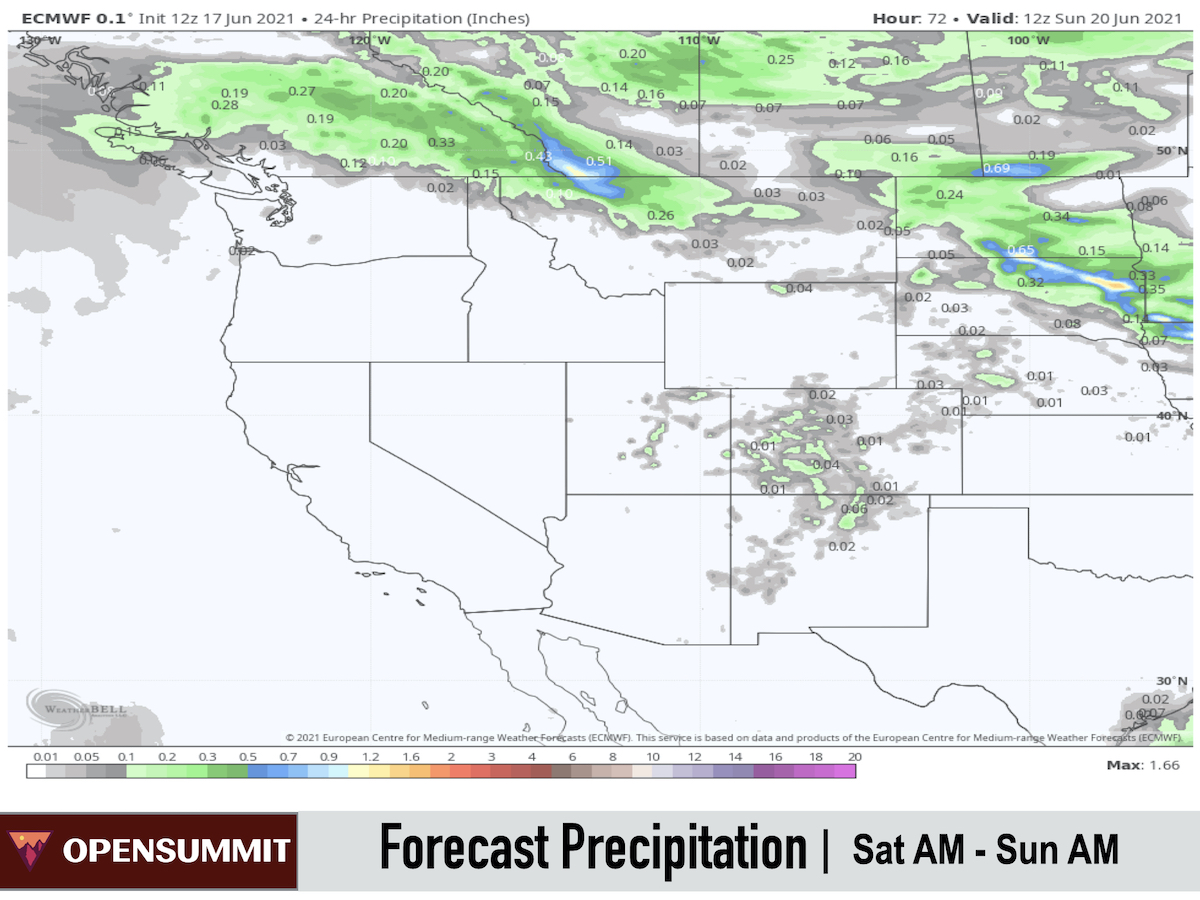 Come Father's Day, our attention will turn to a "backdoor" cold front that will drop down the spine of the Rockies and bring cool temperatures and a decent shot of precipitation. This will be a welcome relief for areas in Montana, Wyoming, and along the Front Range of Colorado. 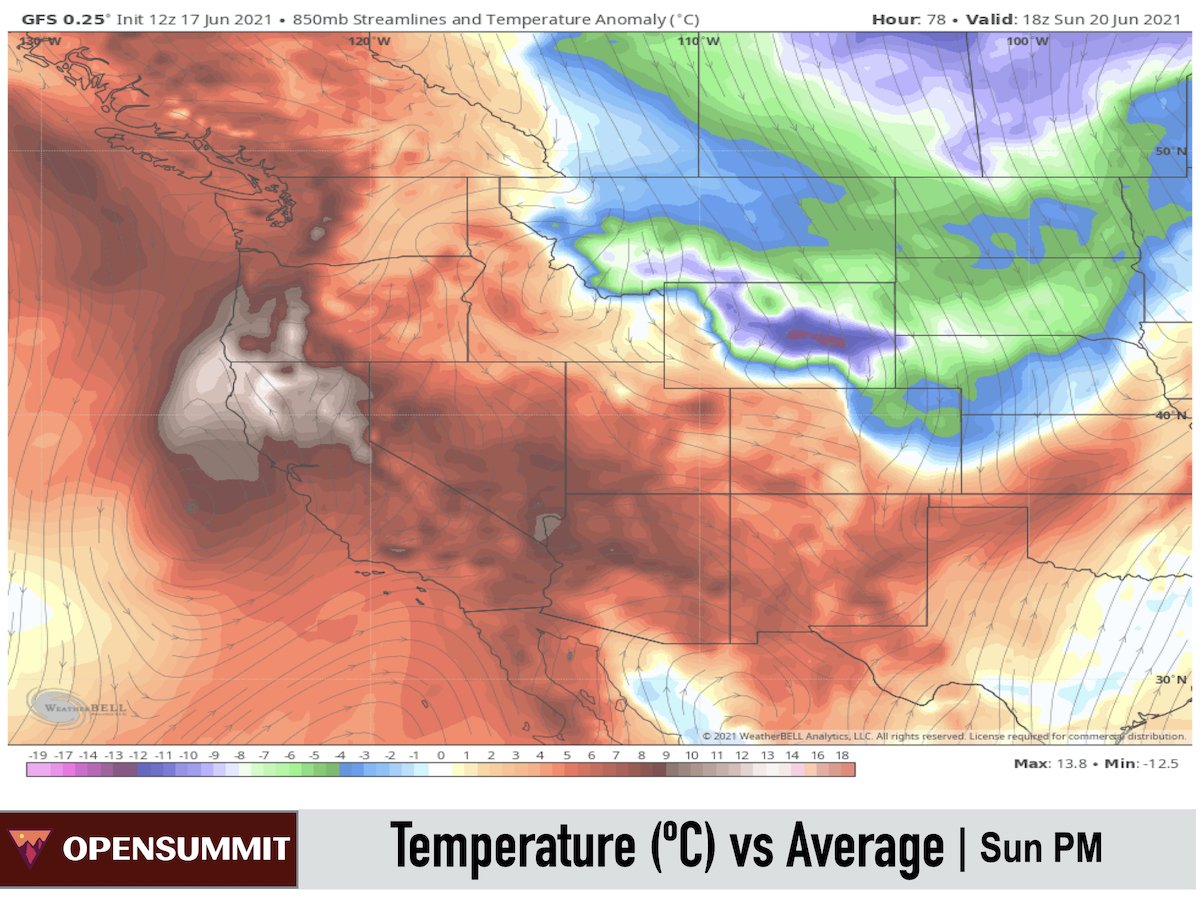 You can see the moisture really focusing on Montana and Wyoming from Sunday morning through Monday morning in the following precipitation graphic, along with our 5-day hourly forecast for Beartooth Pass. 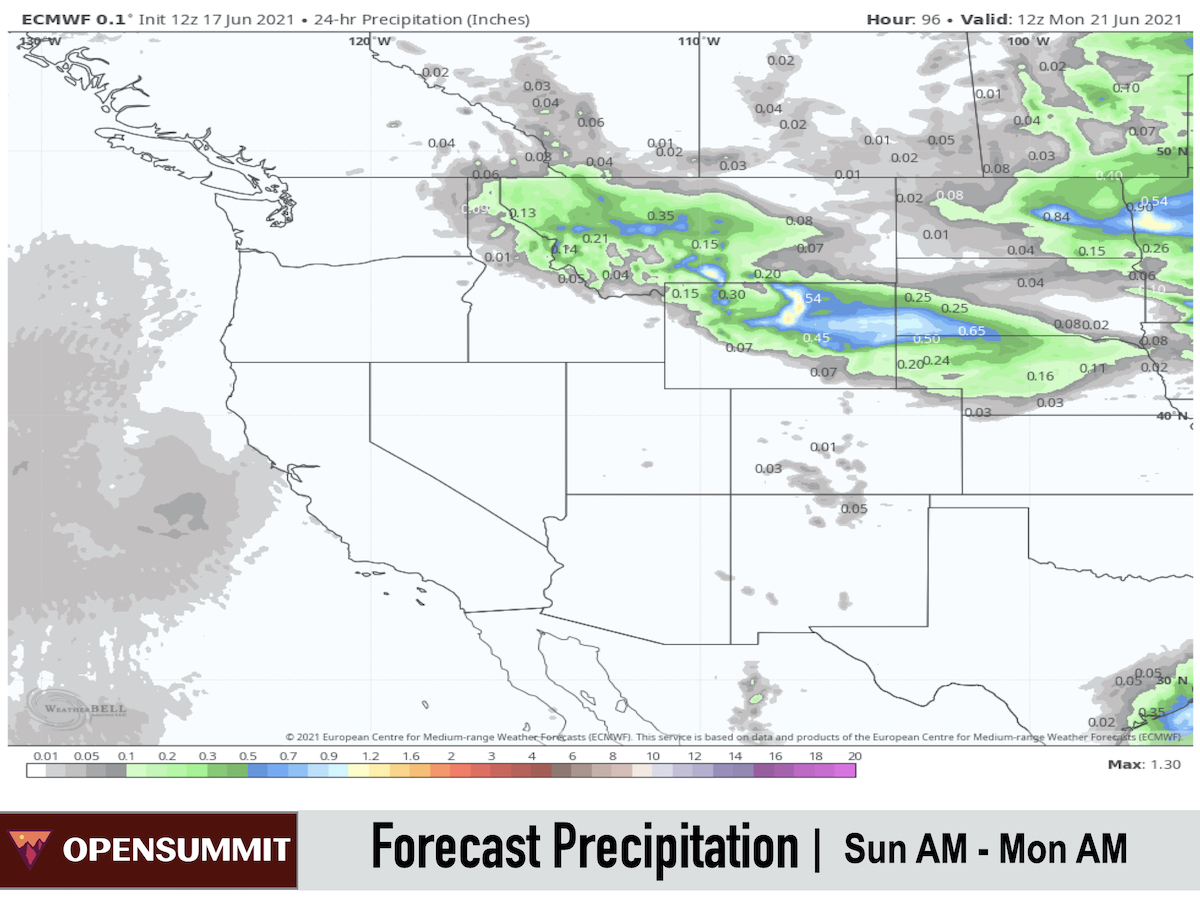 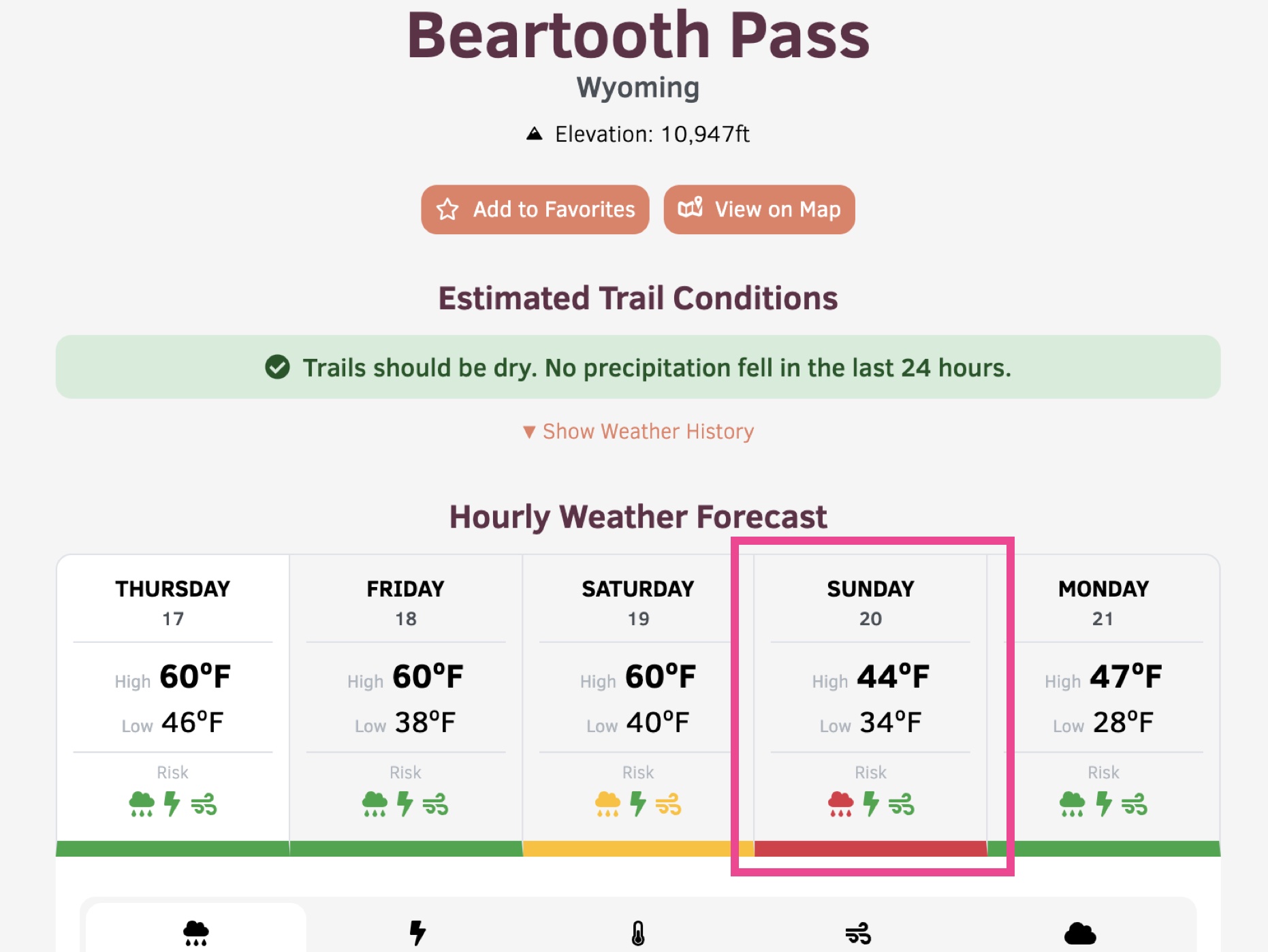 The color-coded icon for precipitation clearly shows the increased chance. This is one of my favorites features in OpenSummit as it provides a nice "at a glance" view for upcoming weather and the risk for precip, lightning, and wind.

Don't forget to click the star on any location screen to conveniently compare estimated trail conditions, high/low temps, and color-coded precip, lightning, and wind risk via the Favorites tab in the OpenSummit app.

Looking ahead to the first official week of summer, the Western US will receive a cool down (compared to the previous week), along with an increased chance for moisture and thunderstorm activity, especially along and east of the divide. This includes Montana, Wyoming, and Colorado.

We'll then be watching for a storm to set up near the West Coast, which should bring a slight uptick in moisture and isolated storms for Oregon, Idaho, and maybe in the Tetons and Wild River ranges of Wyoming.

Another "backdoor" cold front could once again bring an increased chance for precip and cooler temperatures along and east of the divide late next week as well so that will be something to keep an eye on as we head into the final weekend of June. 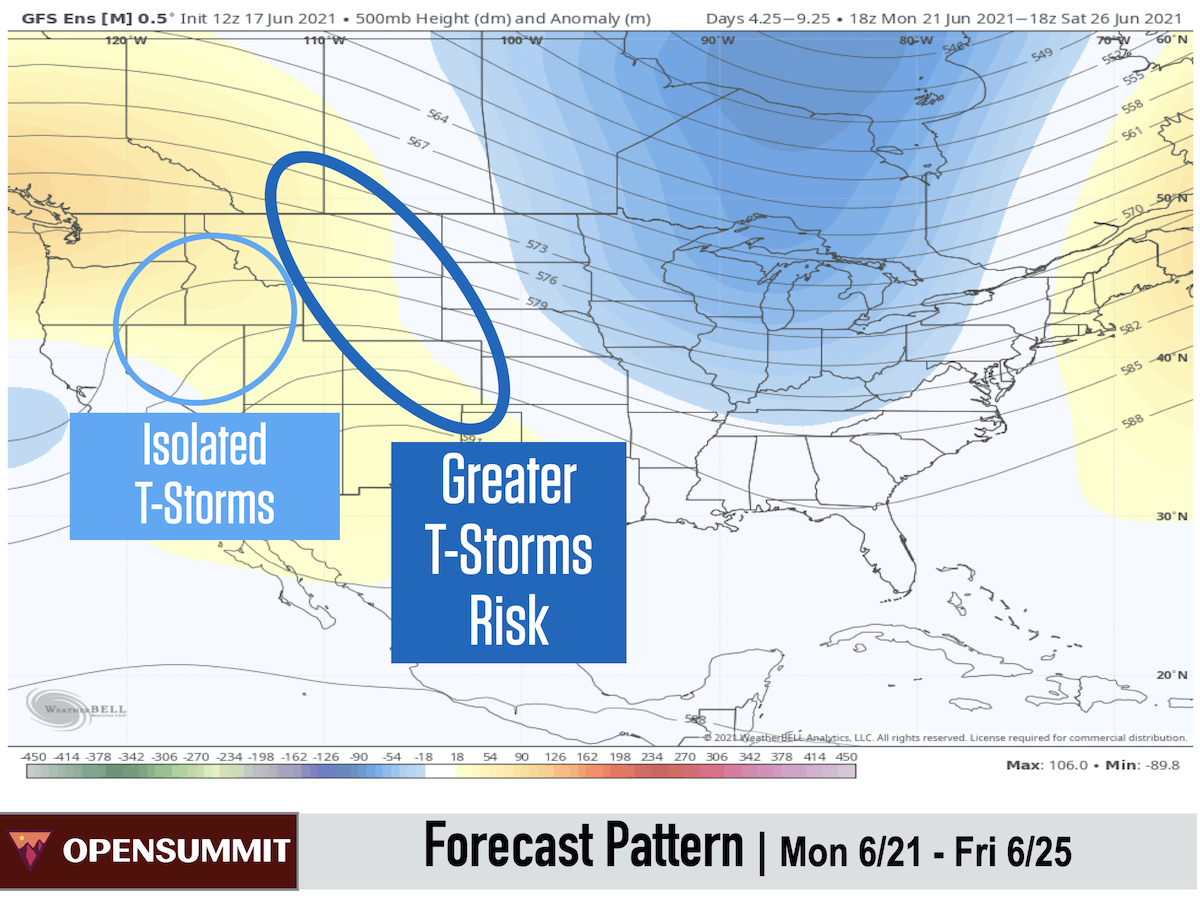 Headed out of service? Download and save high-resolution satellite and aerial imagery base maps in the OpenSummit app (Settings > Your Offline Maps) to be able to see your exact location on the map, even without cell service. 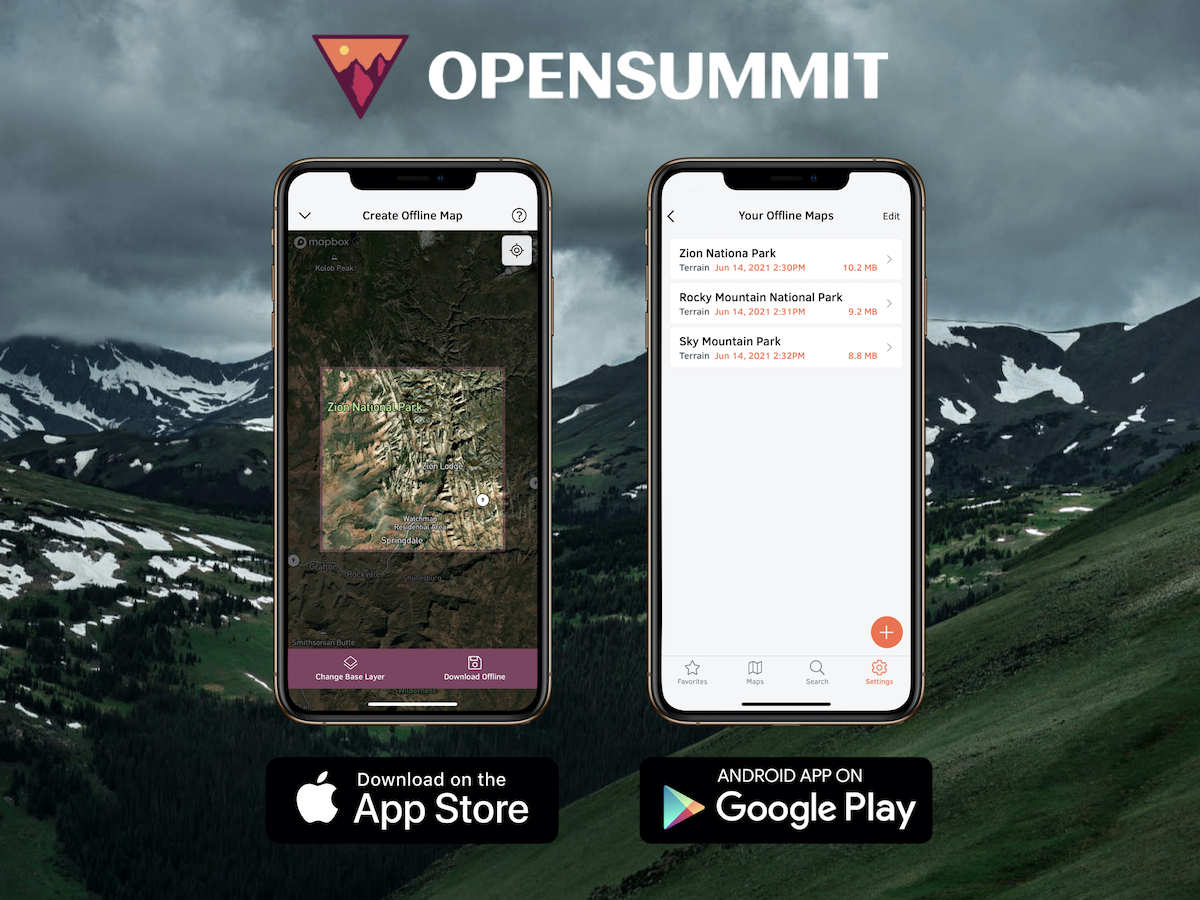 The GPS in your mobile device works perfectly offline, even when the network is nonexistent.

Send Us Your Photos

Have you taken any cool photos related to weather, mountain, nature, or outdoor recreation in the Western U.S. recently? If so, send it over to [email protected] for a chance to have your photo featured in the next Daily Summit!